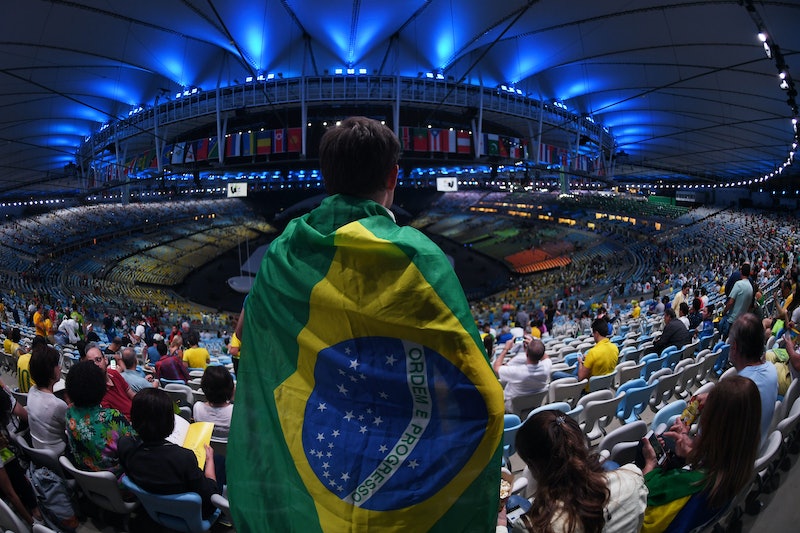 If you didn't tune in to watch the Olympics kick off in Rio on Friday, well, you definitely aren't alone. The 2016 Summer Games opened with a vibrant display of colors, dancing, and music at Maracanã Stadium, but the Olympic curtain-raiser failed to bring in the viewership NBC had been anticipating. Blame it on the tape-delay, the rise of live-stream, or the frequent commercial breaks, this year, NBC's Opening Ceremony ratings were some of the lowest since 1992.

While it's unclear what exactly may have caused ratings for this year's Olympic Opening Ceremony to slip so dramatically, many on social media were critical of the amount of commercial breaks that littered NBC's Olympic broadcast, as well as the network's decision to televise coverage with a tape-delay.

According to NBC, viewership in the United States was highest during Team USA's appearance in the Opening Ceremony's Parade of Nations. Ratings reportedly peaked at 19 as Michael Phelps led the U.S. delegation of athletes into Maracanã Stadium. After that? They fell, hard.

Although expected by the network, the dip in viewership following the brief appearance of Team USA proved problematic for NBC, as the U.S. delegation was introduced to viewers much earlier than it normally is. The Parade of Nations is held alphabetically according to the language of the host nation, and in Portuguese, United States translates to Estados Unidos. With their ratings in mind, NBC reportedly asked the International Olympic Committee to forgo protocol and change the order of the Parade of Nations so the U.S. team would appear at "a more ratings-friendly time."

With its pomp and circumstance, the Opening Ceremony is known for often setting the tone for overall Olympic coverage ratings, meaning NBC could be in hot water with this year's Rio Games.