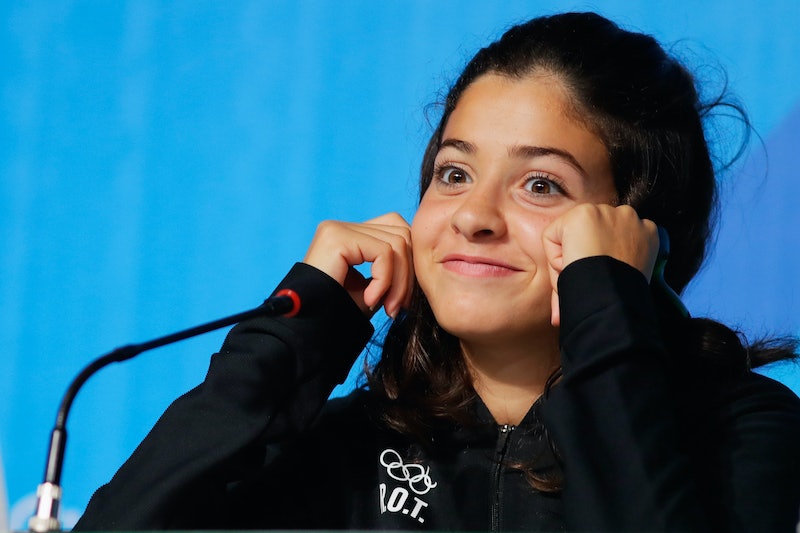 For most Olympians, heading to Rio de Janeiro to compete at the Olympics is the end of a long, competitive journey. Reaching international Olympic level includes hours upon hours of intense training, years of competing at both the local and national level, and reaching a certain level of prestige within the field itself. But, for 18-year-old Yusra Mardini, her path to competing at the 2016 Summer Olympics came with its own unique obstacles. As a member of the International Olympics Committee's very own team, the Refugee Olympic Athletes Team, Mardini is one of 10 Syrian refugees selected to compete under the Olympic flag. But her swimming expertise isn't just for the sake of sport — it also once helped save her life and the lives of 20 others.

“Sometimes we couldn’t train because of the war,” Mardini remembered in an interview with The Independent . “And sometimes you would be swimming in pools where the roofs were [blown open] in three or four places.” Before heading to her current hometown of Berlin in Germany, Mardini trained as a swimmer in her home city of Damascus, Syria. But, despite receiving backing for her talents by the Syrian Olympic Committee, it wasn't long until she had to flee the country, as the war took a toll on her livelihood and her ability to train for the games. However, it wasn't just switching countries and living in a world of war that makes her journey so spectacular. It's what she — and three other Syrian refugees, including her sister Sarah — had to do to get from Syria to Germany that deserves a Gold medal all on it's own: Push a boat full of 20 people from Turkey to Greece after their motor ran out during their 25-day trek to safety.

“We were the only four who knew how to swim. I had one hand with the rope attached to the boat as I moved my two legs and one arm. It was three and half hours in cold water," she described of the September 2015 journey in The Independent. "Your body is almost like… done. I don’t know if I can describe that.” And, with that experience behind her, the 2016 Olympics are sure to be a piece of cake. After finding a home in a Berlin refugee camp with her sister and reunited father (also a swimming coach), Mardini found a place at local swim club where she began training with German coach, Sven Spannekrebs. In fact, the 2020 Olympics were originally in her sights — but now, Mardini already placed first in the opening heat of the Women's 100m butterfly race on Saturday. And she's all set to compete in Wednesday's 100m Freestyle competition.

As far as winning the Gold goes, just competing at the Olympics and representing refugees is all that Mardini can ask for. "All of them [Syrian refugees] have dreams like I do," she told NBC News . "I hope I can do something really good for them, so I can give the people hope and inspire them that you can't stop, even if you lose someone, even if it's war, even if you lose your house, you have to continue."

Yusra Mardini, you are already an inspiration to all of us. Catch the Women's 100m Freestyle race Wednesday, Aug. 10, at 12 p.m. EST.