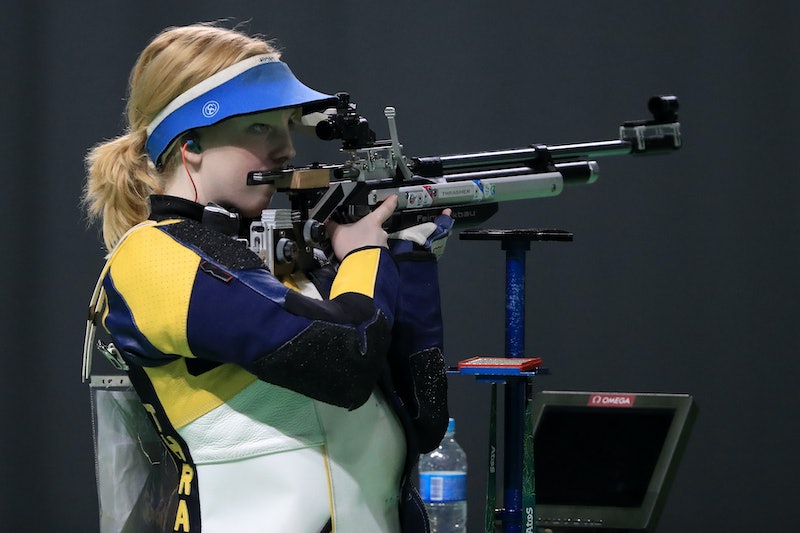 Thrasher, who's just 19-years-old, was not the favorite to win Saturday's 10-meter women's air rifle event, which is why sports commentators have declared her win an upset. According to the BBC, this was Thrasher's first international win. Despite her lack of international experience, Thrasher set an impressive new record and defeated China's Du Li. Another Chinese athlete, Yi Siling, came in third.

With the rash of mass shootings in America, coupled with the ever-present debates between Republican politicians who favor gun rights (and the NRA) and Democratic politicians pushing for gun reform, Thrasher's win has become a major talking point on social media. America, after all, is the country with the most guns, the most mass shootings, and the most gun deaths. As we near the two-month anniversary of the Pulse nightclub shooting, which killed 49 people, it feels inappropriate to some to celebrate an Olympic rifle competition.

Like always, the political jabs went both ways. There were many Twitter users who used Thrasher's win to fire back at liberal Americans for pushing gun control laws.

Thrasher's win has certainly sparked some complicated feelings among Americans. It's a shame that her win has to be politicized at all. The 19-year-old college student has spent countless hours working toward her Olympic dream, and achieved it in dramatic Olympic-like fashion. Her gold medal win will always be memorable — she will go down in the history books for winning the first gold medal for the United States at the Rio Olympics.

But Thrasher's win does come at perhaps the wrong time for America, which has become desensitized to mass shootings, police shootings and accidental gun deaths. We're stuck in an identity crisis — should guns still part of our American identity?— and it's not surprising that Thrasher's win rubbed some Americans the wrong way.