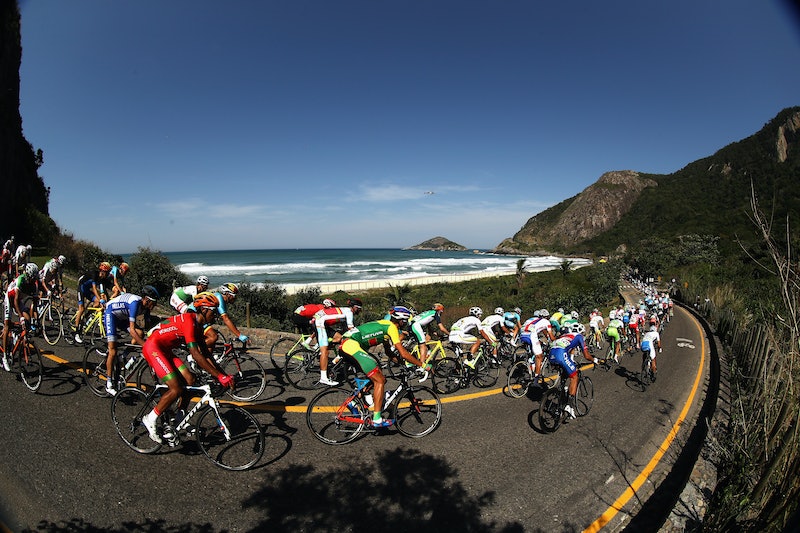 More than 140 riders from 61 different countries set out from the starting line of the men's Olympic road race in Rio on Saturday and after 150 grueling miles (and quite a bit of drama), one man came out on top: Belgium's Greg Van Avermaet won gold in the men's road race following a dramatic sprint to the finish.

Despite spanning roughly six hours, there was hardly a dull moment in the men's Olympic road race. Race leaders Vincenzo Nibali of Italy and Sergio Henao of Colombia saw their gold medal dreams abruptly dashed when they both crashed on the course's final descent. Moments later the same descent took out Geraint Thomas of Great Britain, leaving Rafal Majka of Poland with a 25 second lead in the final three miles of the race.

Yet it wouldn't be an easy cruise across the finish line for Majka. In the final stretch, Van Avermaet of Belgium and Jakob Fuglsang of Denmark steadily bit into the Polish cyclist's lead until the three riders were riding neck and neck (or wheel and wheel?) for a shot at the gold. In an exciting — but almost certainly exhausting — sprint to the finish, Van Avermaet managed to pull ahead in the final seconds to cross first with a final race time of 6 hours 10 minutes 5 seconds. He was followed closely by Fuglsang and Majka at six hours 10 minutes 10 seconds.

"This is the best title you can have, Olympic champion," Van Avermaet told reporters minutes after the race ended. "I had a great day and everything went perfect in the final 15 kilometers. Lots of guys crashed trying to take risks. I just kept it safe, stayed focused. I knew I had a good sprint. I caught Majka and I knew I had the best sprint of the final two."

While Van Avermaet has a solid reputation for stong performances in classic cycle races, many had believed it would be Nibali, Alejandro Valverde of Spain, or this year's Tour de France winner Chris Froome of Great Britain who would ride their way to gold going into Saturday's race. Froome came in 12, just behind his teammate Thomas, while Valverde placed 30. Following his crash in the final descent, Nibali cycled across the finish line in 38th place with a race time over the event's limit.

Brent Bookwalter of the United States finished 16 with a race time of 6 hours 13 minutes 36 seconds.