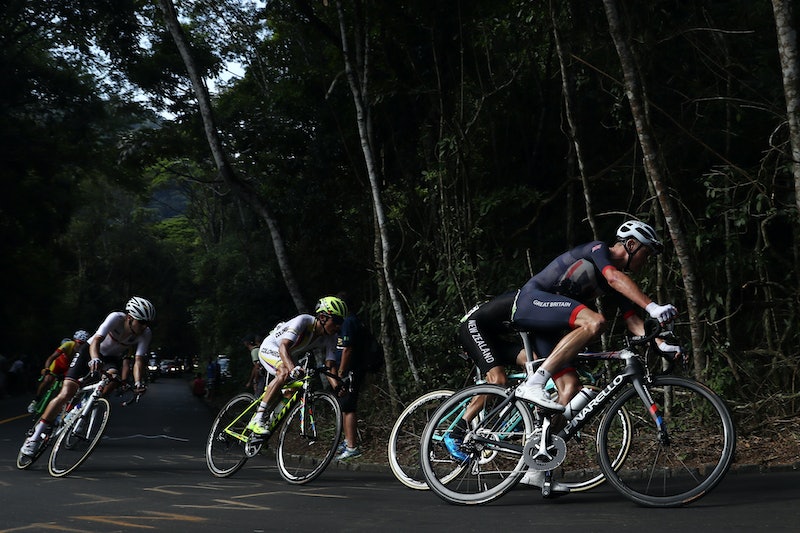 While the men's Olympic road race was undoubtedly a grueling feat of athleticism for the more than 140 riders who took on the 150-mile course, the event was also a heart-pumping six-hour experience for spectators. With hairpin turns, steep descents, slick roads, and even a stretch of cobblestone, Saturday's road race was anxiety-inducing to watch with at least five riders crashing along the course. But was Rio's course the most dangerous Olympic road race yet?

Ahead of the Games it was no secret Rio officials had marked off a dangerous 150-mile route for the Olympic road races. With stretches winding through treacherous jungle roads, past Fort Copacabana and the sunny beaches of Ipanema, around some of Rio's grittiest favelas, and along Brazil's magnificent coastline, the route for the men's and women's road races was without a doubt a show-stopping tour of the Olympic host city. But with great beauty comes great danger.

Olympic broadcaster NBC described the route, which has riders climb roughly 11,800 feet in total, as "harrowing," "brutal," "slick" and "jarring." Even many of the cyclists preparing to attempt it seemed a bit uneasy with the route "It's the hardest course I've seen in a single-day race," American rider Megan Guarnier told NBC.

While speaking to reporters in Rio ahead of the race, New Zealand professional road racing cyclist George Bennett seemed to still be in a bit of disbelief about the dangers of the course. "I'm really surprised that someone signed off on a course this hard," he said. "It blows my mind. It's going to devastate the field and there's not going to be so many finishes I don't think."

Despite the dangers of the course — and Bennett lists quite a few — the New Zealander was excited to race on the adrenaline-pumping route. "It's everything I like," he said. "It's hectic, it's crazy downhills, it's really, really dangerous (in) a lot of the places. All the corners push you out and there's these pretty walled-off curbs and things the whole way down. Slippery roads, a bit of oil, things like that. It's definitely got a lot of dangers and some you're aware of that could send you home early but at the same time I like the chaos, I like the climbs, I like the downhills."

Bennet was right about Rio's course devastating the field of riders. In the men's contest, a series of crashes made for a thrilling race while also highlighting the dangers of both the sport and course. Nelson Oliveria of Portugal and Richie Porte of Australia both crashed (in separate incidents) while speeding down one of the course's sharp descents with about 22 miles left in the race. Pack leaders Vincenzo Nibali of Italy and Sergio Henao of Colombia fell on the course's final descent moments before the same steep downgrade would take out Geraint Thomas of Great Britain.

But are the perils and spills seen along Rio's road race just something that comes along with competing at the Olympic level? Probably not. "I think it's a course that we've never seen before and probably won't see again for a long time," Bennett said.