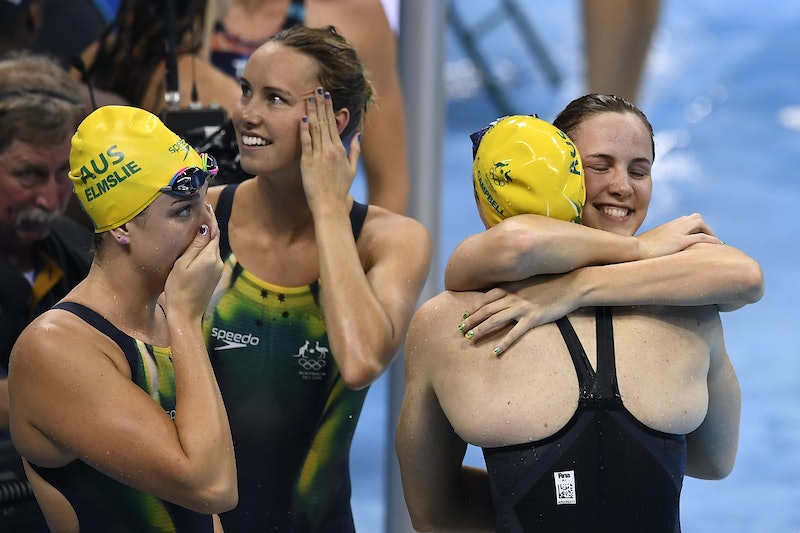 On Saturday night, one of the early high-profile medal contests of the 2016 Summer Olympics took place, and now you can update those medal counts: Team Australia has won the women's 100m freestyle relay, bringing a gold medal to their home country. Their successful gold medal relay was highlighted by the back-end performances of Bronte and Cate Campbell, Australia's dynamic swimmer sister duo, and when it was all said and done, it ended up being a new world record ― the Australian women completed the four-leg, 100-meter freestyle relay in just 3:30.65.

Entering the finals on Saturday night, the heavy favorites were the American and Australian teams, with the USA quartet considered a strong contender to claim the gold. And in the end, it did come down to those two squads, but with Team Australia coming out on top, just like they did in the 2012 Summer Olympics in London. The American women will walk away from relay with a silver medal, while Team Canada will take the bronze after a third-place finish.

The dramatic finish to the race centered entirely on Australia's Cate Campbell and America's Katie Ledecky, who anchored the relay, swimming its final 100-meter leg. Ledecky had been exemplary in her preliminary relay race, but in the final, she came up short against Campbell.

This won't be the last American swimming fans will see or hear of Ledecky, in all likelihood. She's widely considered the strongest overall swimmer in the world on the women's side, and she's considered a strong favorite to win multiple gold medals this year. Her loss in the relay means she won't be able to reach five golds, but that would've been an astonishing feat given the hard-charging talent of the Australian team. She's still potentially in the running for gold in four upcoming events, however: the 200-meter, 400-meter, and 800-meter individual freestyles, which will be happening on Monday, Sunday, and Thursday respectively.

As for the Australian team, on the other hand, they get to ride the adrenaline and delight of knowing they took home the Olympic gold on Saturday night. World records don't always last that long, because athletes are getting more and more impressive, refined, and incredible as the years roll by. But for the time being, those four women ― Emma McKeon, Brittany Elmslie, Bronte Campbell, and Cate Campbell ― can lay claim to swimming that 100-meter relay faster than it's even been done before, and that's pretty cool.