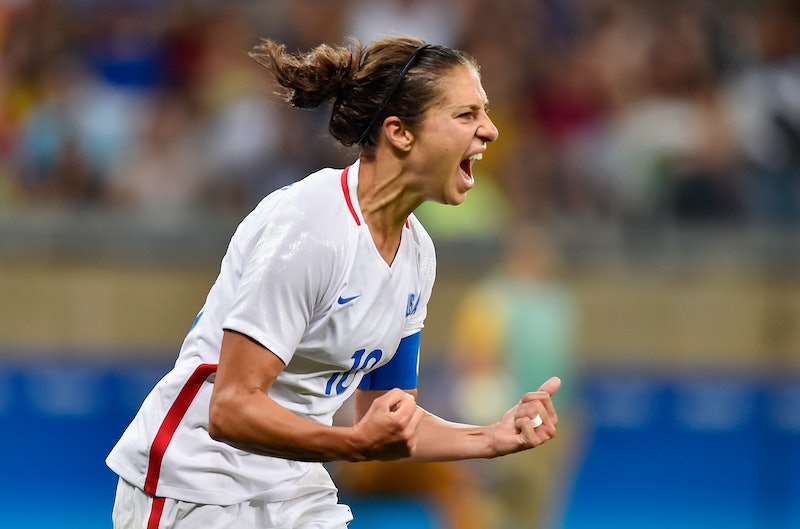 After a scoreless first half and a hotly contested second, it's now official: the USA women's soccer team beat France by a final score of 1-0 on Saturday afternoon. The American women prevailed behind a strong performance by superstar goalkeeper Hope Solo, and a clutch second-half goal by Carli Lloyd. The American women are now leading Group G with two wins and no losses, and will match up against Colombia on Tuesday afternoon.

The match between the French and American teams was a grinding and grueling affair for the first half, which saw the U.S. look slightly wobbly on defense, leaning time after time on Solo to protect their net, a very formidable last line of defense.

Lloyd's second-half tiebreaker wasn't an act of singular virtuosity, either. Rather, it was a textbook case of teamwork and opportunistic hustle, as a shot on goal by Tobin Heath deflected off the left post and shot out in front of the goal, allowing Lloyd to quickly, cleanly boot it in. She enjoyed a hearty round of celebration afterwards, and as it turned out, it was well-earned ― her goal in the 72nd minute ended up being the decisive strike, with Team USA successfully running out the clock for the remaining 18 minutes (plus three minutes of extra time).

The victory over France comes hot on the heels of Team USA's 2-0 victory over New Zealand on Wednesday. If that sounds confusing to you ― wasn't the Olympics opening ceremony on Friday night? ― there's a good reason for that. Namely, the soccer tournaments actually started on the so-called "Day -2" in Rio, kicking off two days prior to when the games began in a full-fledged way. In other words, the American women got a head start, and now there's standing head-and-shoulders above the rest of their group. Team USA currently leads Group G with six total points, with France coming in second at three points.

If you're eager to follow the next chapter of Team USA's quest for Olympic gold, then you'll want to be sure to tune in. The next match against Colombia is scheduled for Tuesday, August 9th at 6:00 p.m. ET, and it should be a fairly safe win for the Americans. Colombia is currently stuck in last place in Group G, having lost their only match so far against France by a score of 4-0. You can never be sure what'll happen until the game is actually played, however, so make sure you set aside some time to watch!