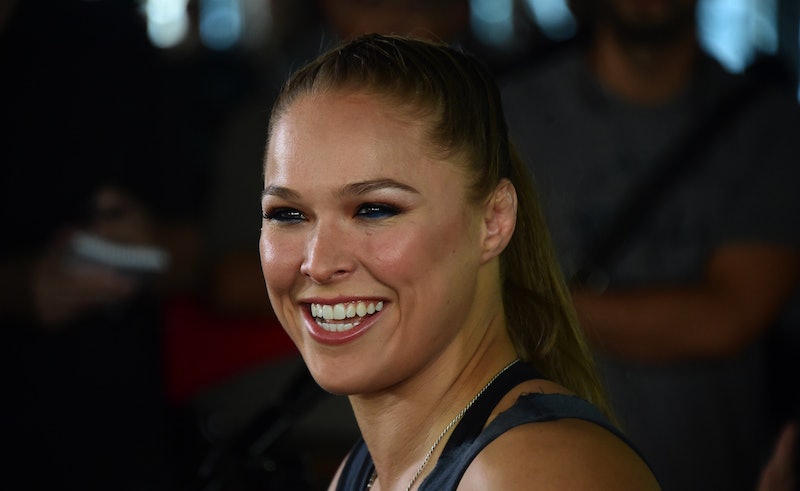 Strict diets are a huge part of any athlete's training — they may consume an astronomical amount of calories on a daily basis, but gold medalists don't tend to put away milkshakes and potato chips. When your performance relies on your body being in perfect physical condition, every calorie counts. But, if the number of vegan Olympic athletes is anything to go by, it's possible to succeed without ever touching the grilled chicken many of their competitors favor.

At first, "vegan athlete" might seem like a contradiction. It's no secret that the vegan diet has become something of a trend; over the last few years, dozens of public figures have proclaimed their love for the meat- and dairy-free life. Furthermore, athletes usually adhere to high-calorie, high-protein diets, which can be hard to achieve without animal products. However, some athletes have been vegan since long before Beyonce and Jay-Z, and it's totally possible to get all the protein they need from a plant-based diet. Even a few professional football players have tried out vegan diets in the past, with varying degrees of success.

Eating healthily without animal products does take more planning, especially with the nutritional needs of professional athletes, but here are seven vegan Olympians who are making it work.

Perhaps the most famous vegan athlete is American track and field star Carl Lewis. Over the course of four Olympic games, he won nine gold medals and is widely considered to be one of the greatest track athletes in the world. He also credits some of his success to his vegetarian diet, which is often vegan as well. "I changed my diet to vegan diet. ... I set all my personal bests at 30 years old as a vegetarian," he said in an interview with Oprah.

Russian bobsledder (and professional armwrestler) Voevoda has competed in three Olympics, winning two gold medals in the Sochi games. "At first, I approached [going vegan] from a scientific standpoint. However, I then came to have some ethical views about this diet. I love happy, living animals!" he told PETA UK in 2014.

Ronda Rousey may be known primarily as a mixed martial arts fighter now, but she won bronze for judo in the 2008 Bejing Olympics, becoming the first American woman to medal in the sport. After her Olympic win, she briefly became vegan. "As of right now I am a vegan. I put that off until after I was done with this tournament," she told The Washington Post. In 2013, she tweeted that she was "not really vegan mostly dairy/gluten free."

Australian swimmer Murray Rose won four gold medals; many believe he would have won more if he hadn't been controversially banned from the 1964 Tokyo Olympics for missing the Australian Championships earlier that year. As The New York Times wrote when he passed away in 2012, "Rose was a vegan at a time when shunning meat and fish was decidedly an oddity. His diet included sunflower seeds, sesame, unpolished rice, dates, cashew nuts and carrot juice." According to The Chicago Sun-Times, his diet earned him the nickname "The Seaweed Streak."

Cam Awesome is currently representing the U.S. in boxing at the Rio Olympics. According to his Team USA bio, the boxer is a "proud vegan and advocate for that lifestyle."

Internationally famous tennis pro Venus Williams has won four Olympic gold medals in the past and is in the running for more at this year's games. According to her website, she started a vegan, raw-food diet after being diagnosed with Sjögrens Syndrome. Since then, she refers to herself as a "cheagan," or "cheating vegan." "I think it's pretty well known. ... I'm not perfect, but I try," she said in 2013.

Along with partner Eric Radford, Canadian figure skater Meagan Duhamel won silver in the Sochi Olympics. She attributes much of her health to being vegan, which she chose to do after reading a book advocating the diet. "I thought I was just going to do it until the (2010) Olympics, but then I didn't go to the Olympics, and then I ended up liking it so much, I think I'll be a vegan for the rest of my life," she told Huffington Post Canada.

More like this
What Is Jeanie Buss' Net Worth? The Lakers President Is Uber Rich
By Hugh McIntyre
Experts Say These 23 Things Won't Happen In A Strong Relationship
By Carolyn Steber
Here's Your Daily Horoscope For May 16, 2022
By Mecca Woods
When Is The Next Full Moon? Your 2022 Calendar
By Nina Kahn
Get Even More From Bustle — Sign Up For The Newsletter