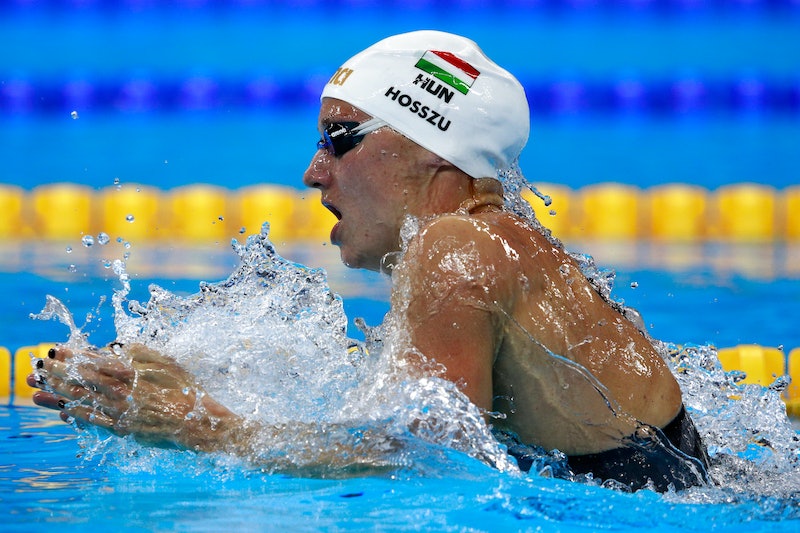 She's known as "The Iron Lady," a testament to her grit, determination, and resolute work ethic, all of which paid off Saturday in Rio. Hungarian swimmer Katinka Hosszú shattered the world record for the women's 400-meter individual medley to win her first Olympic medal — a gold no less — at the 2016 Summer Games on Saturday. It was a personal victory of sorts for Hosszú, who, despite being a three-time World Champion and competing in the last three Olympics prior to her appearance in Rio, had never managed to capture an Olympic medal.

Hosszú broke away from her competitors early in the women's 400-meter individual medley to maintain a noticeable lead throughout the race. As the eight swimmers launched into breaststroke, the slowest of the medley's four strokes, Hosszú was untouchable, leading by a huge margin. In the end, with a race time of 4:26.36, Hosszú had managed to cut more than 2 seconds off the world record of 4:28.43 set by China's Ye Shiwen at the 2012 Olympics.

It was a stunning victory for the 27-year-old Hungarian, who'd reportedly briefly considered throwing in the towel following a series of disappointing performances in London. "I've been chasing that world record for some time now," Hosszú told reporters after the race. "It's been over seven years that I have been thinking about it. I feel like I proved myself, not just to other people but to myself."

Born in Pécs, Hungary, swimming has dominated Hosszú's life from an early age. As a young girl, Hosszú was trained by her grandfather until the age of 13, and later moved to the United States to swim for the University of Southern California. After a series of disappointing performances that culminated with the London Games, Hosszú asked Shane Tusup, her husband and former USC swimmer, to coach her.

Since then, she's been considered one of the most dominant women in professional swimming, racking up medal after medal at World and European Championships. She earned her nickname as the Iron Lady — a nod to her stamina, her commitment, her vigor — from the media after swimming her way to five medals in just two days at a 2012 World Cup in China.

While the new world record Hosszú set Saturday in Rio blew spectators and competitors away, the Iron Lady is already thinking about how she can shave a few more seconds off the time. "I'm already thinking how I can get faster," she told Yahoo! Sport. "I definitely want to, want to get faster, and I think I can."