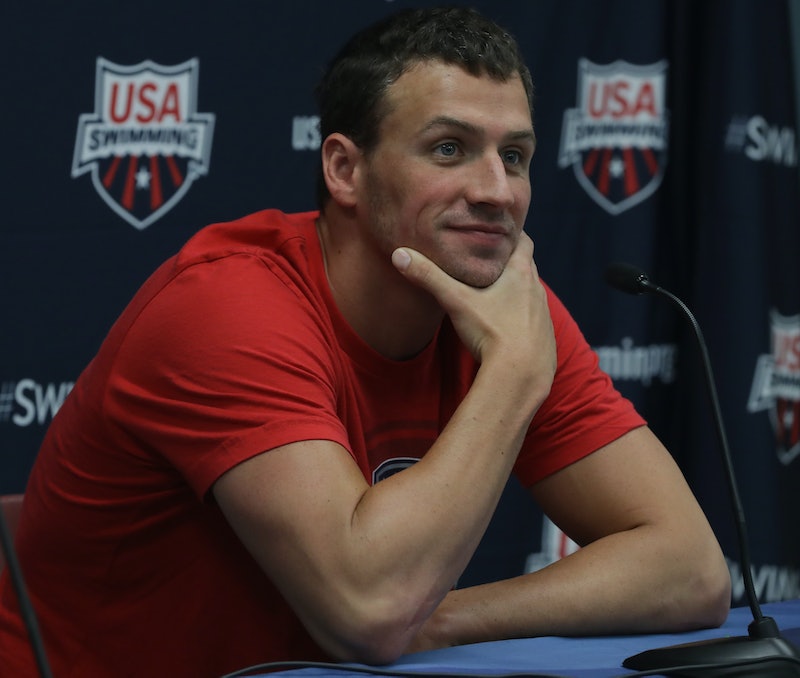 The Summer Olympics are here, which means it's time for the return of everyone's favorite swimmer bro, Ryan Lochte. The athlete, who has 11 Olympic medals to his name (so far), has never failed to make headlines between Olympics, but who Lochte is dating has always been a question on people's minds. Yet now, it seems possible that he's in a happy romance and has a solid support system while in Rio.

Back in May, US Weekly reported that Lochte was dating Playboy model Kayla Rae Reid, and the couple appear to be going strong, although there's no word on if they're officially together. According to her Instagram posts, Reid has joined her boyfriend in Rio to cheer him on. Lochte has posted many pictures of their relationship over the past few months, giving them a couple name — "Rayla" — and making it clear that Reid has met the parents with a photo of Reid, Lochte, and Lochte's mother at dinner. Reid herself has documented their relationship thoroughly, recently celebrating Lochte's Aug. 3 birthday with a cheeky reference to the silver hair Lochte debuted before the Rio Olympics.

According to her LinkedIn, Reid modeled for Monster Energy before becoming a Playboy model and playmate in 2014. Her Playboy bio reveals that she was born in Virginia but lives in California, and that she wants to launch a TV career one day. Her Instagram is full of pictures by the pool, exercise shots, and inspirational quotes. And, of course, there are quite a few photos of Lochte featured in the mix.

Lochte has always been vocal about his social life. He attempted to trademark the word "jeah," for one thing, and he even starred in one season of an E! reality show called What Would Ryan Lochte Do? He has previously been romantically linked to elementary school teacher Amanda Sauer, Carmen Electra, and swimmer Blair Evans, among others, but in May, he told Us Weekly that he has grown up and settled down in recent years:

I'm definitely more mature. Going into the [London] games I was more of a single guy party boy. And now, it's definitely changed. I'm settling down, actually taking care of my body outside the pool and I think that's the biggest thing that I've noticed in my training since 2012...I'm eating healthier and I'm getting massages. I'm just doing everything—I'm not going out partying any more.

It seems like Lochte is taking the Rio Olympics seriously. The New York Times reports that Lochte has discovered a way to trim his freestyle time, which viewers will have to see for themselves when he competes on Wednesday. It must be nice for Lochte to have Reid there cheering him on while he races for gold.

More like this
Marcus Rashford Took Inspo From Kravis For His Adorable Proposal To Girlfriend Lucia Loi
By Frances Stewart
Are Tom Daley & Louis Theroux Bound For 'Strictly'?
By El Hunt
Ryan Reynolds Brought Some Famous Friends To Wrexham A.F.C's Last Game Of The Season
By El Hunt
Jake Daniels Just Became The UK’s First Active Football Player To Come Out As Gay Since 1990
By Sam Ramsden
Get Even More From Bustle — Sign Up For The Newsletter