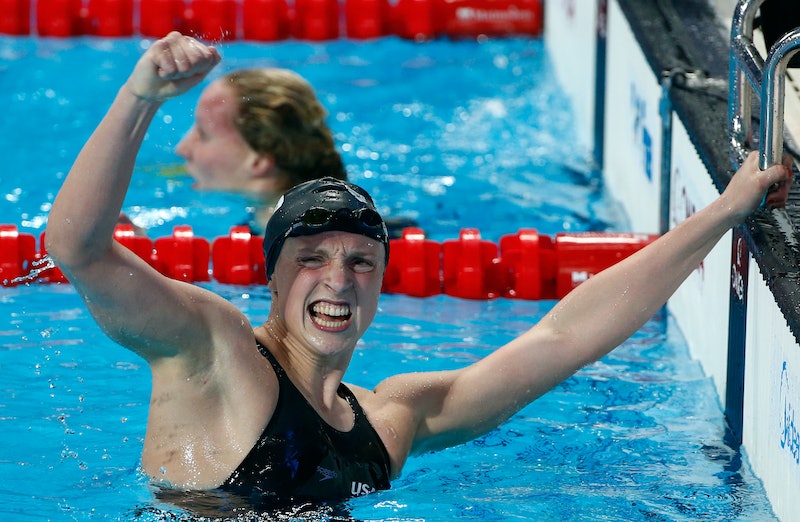 Two days into the 2016 Rio Olympics and American swimmer Katie Ledecky is already making waves. Big ones. A day after helping the United States take the silver medal in the 4x100-meter freestyle relay, Ledecky set a new Olympic record of 3:58.71 in the women's 400-meter freestyle preliminary heats. It's an impressive start to the Games for a teenager many are calling the future of swimming and the one to beat in Rio.

In 2012, hardly anyone at the London Games knew who Ledecky was when the then-15-year-old American took her place on the block for the women's 800-meter freestyle event. It was the first and only shot Ledecky would have that year at an Olympic medal, but it was all the virtual underdog needed. In a shocking upset, Ledecky pulled ahead of her competition to claim the gold medal with a time of 8:14.63, beating Janet Evans' 23-year-old American record, and nearly taking the world record from the 2008 gold medalist, Great Britain's Rebecca Adlington, in her home country.

Fast forward four years, 11 shattered world records, and 14 major international competition victories later and everyone knows who Ledecky is. At 19, the two-time Olympian is already being touted as one who could eventually edge 31-year-old Michael Phelps out of the title of most decorated Olympian. She's off to a fantastic start in Rio, setting a new Olympic record Sunday during her heat for the women's 400-meter freestyle, which is scheduled to wrap up later in the day.

If Ledecky's performance in the event's prelims is any indication, we may see the American teenager set a new world record in the final. Should that happen, Ledecky would hold the three fastest times for women in the 400-meter freestyle as she eclipsed her own world record of 3:58.86 at the 2014 Pan Pacific Championships with a time of 3:58.37. She also currently holds the last four world record times for the 800-meter. Along with breaking records — Olympic or world — Ledecky will also attempt to become the first woman since Debbie Meyer in 1968 to earn gold medals in the 200, 400, and 800-meter individual freestyle events during the same Olympic Games.

Ledecky is without a doubt redefining women's freestyle swimming. She's not so much making a name for herself as much as she's simply making the sport hers, and that's something both her teammates and her competitors are coming to realize. "She never loses," Ledecky's Team USA teammate Maya DiRado told ESPN. "Her off days are winning by a lot but not setting the world record. It's a totally different standard than everybody else is working on."

Ultimately, as 15-year-old Ledecky proved at the 2012 London Games, anything can happen at the Olympics. But Ledecky seems well prepared and well trained to capture gold again this year in Rio. Perhaps the Danish distance swimmer Lotte Friis said it best: "If Katie does what she has been doing the past four years, we are all swimming for second and third place."