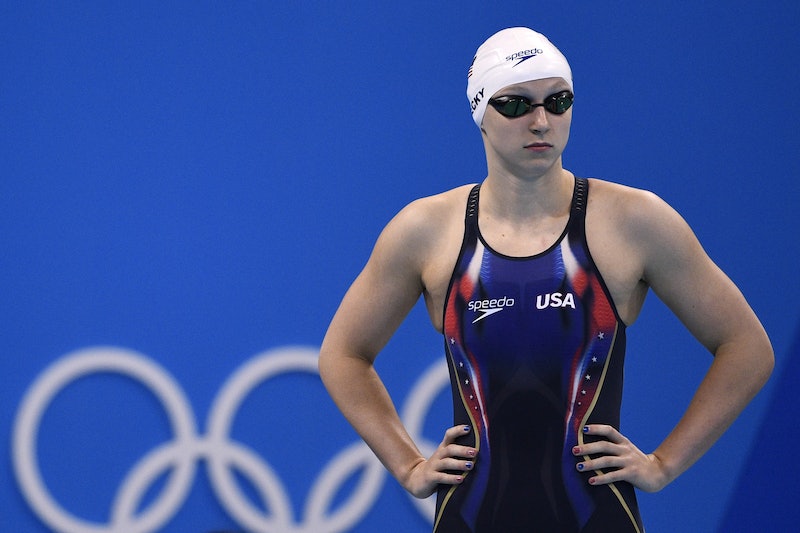 At just 19 years of age, American freestyler Katie Ledecky has been crushing world records like it is going out of style for the past four years. These seven facts about Katie Ledecky will make your head swim, guaranteed.

Born Kathleen Genevieve Ledecky on March 17, 1997, in Washington, D.C., Ledecky's short career as an internationally-ranked competitive swimmer has already been chock full of successes. Building on a solid high school career at Stone Ridge School of the Sacred Heart in Bethesda, Maryland, where she completely obliterated her school's record board, Ledecky was making waves long before she even put a toe in the water as the youngest member of Team USA at the 2012 London Games.

Not content to sit on her laurels after winning her first gold medal at age 15, Ledecky likes to make crushing world records look like child's play. Currently, the swimming star is responsible for holding all of the top-10 times in one of her signature events, the 800-meter freestyle, and will be defending her world record and gold medal in the same event in preliminary heats on Thursday and, in all likelihood, during the final heat on Friday.

So, without further ado, check out these seven incredible facts about Ledecky's short, but incredibly fast, swimming career.

She Already Broke An Olympic Record — In A Preliminary

She Holds All The Records At Her Old High School, Except One

After finishing out her senior year at Stone Ridge School of the Sacred Heart in metro D.C., Ledecky walked away with a diploma, and also with her name dominating the school's swimming records board — she holds the school record for every event possible except the 100-yard breaststroke. That's seriously impressive.

She Knows How To Give Back

Ledecky is Catholic, and credits her upbringing with helping her form a "strong core" that transcends her physical abilities. She's active with Catholic Charities, Wounded Warriors, and Bikes for the World, a non-profit that helps get working bikes to people who need them most in developing countries.

Besting The Boys In The Pool Is No Big Deal

Ledecky's time in the 1,500-meter freestyle was more than a second faster than her fellow Olympic teammate's performance as a 19-year-old swimmer. No big deal, except when the teammate in question is 11-time Olympic medalist Ryan Lochte. Ledecky's performance in Kazan, Russia, last year at the World Championships in the 1,500-meter freestyle placed her in the top 100 fastest times ever recorded worldwide — on the men's roster.

When Lochte was notified that she had beaten his own breakout 1,500-meter time by more than a full second, he apparently sighed and said: "Ledecky beat me. Nice," before adding in some kind words about his fellow swimmer. "She's one of the best distance freestylers I've ever seen. I trained with her in Colorado once, and she made me look like I was stopping."

What I like most is that Katie doesn't worry about the expectations that others may put on her. She has a maturity and singular focus that is an inspiration for people of all ages, in all walks of life.

If that wasn't enough praise, Evans finished out her nomination of Ledecky by saying: "Katie is not telling people what they can do, she's showing them how they can do it."

Competing in the 2012 London Summer Olympics, Ledecky was the youngest member of Team USA at just 15 years old. That didn't stop her from shocking the swimming world and winning gold in the 800m freestyle, though.

She Keeps Stacking Up World Records

Ledecky hasn't been able to stop crushing it on the world stage. She currently holds the world records in the 400m, 800m, and 1500m long course freestyle events, and it doesn't look like she's going to stop doing her thing anytime soon.

With the amount of hard work, dedication, and sheer strength of will that Ledecky has been bringing to the pool since her swimming career began, it is pretty plain to see that the 19-year-old swimmer is going to keep besting records for a long time to come.