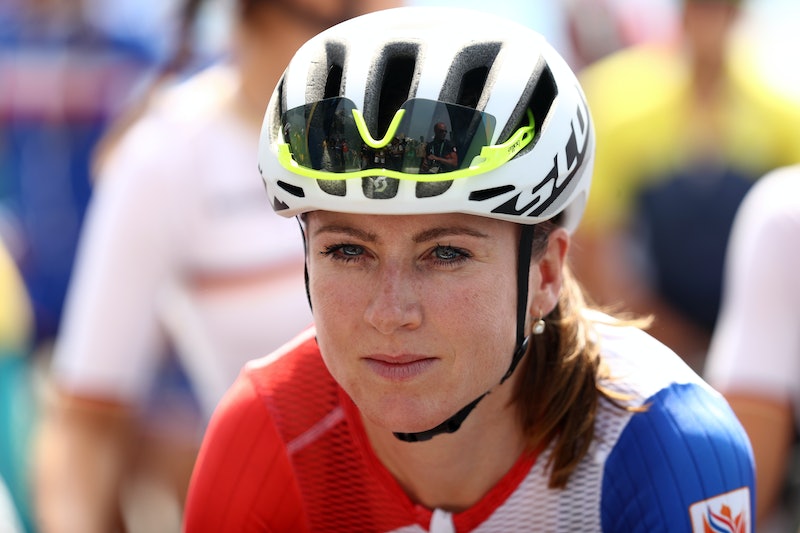 She was leading the women's road race, but on a downhill stretch, Dutch cyclist Annemiek van Vleuten crashed, and it was horrifying to watch. As she was going into a turn with about seven kilometers to go, van Vleuten flipped over her bike's handlebars and slammed into a curb, tumbling to lay motionless on the side of the road. Viewers around the world are deeply concerned about her wellbeing, and though the Olympics have not yet provided an official update on her condition, the Royal Dutch Cycling Federation tweeted that she is OK. Update: Team Netherlands released a statement on van Vleuten's condition on Wednesday saying that she was well enough to leave the hospital after her crash on Sunday. "Considering the circumstances she is doing well," Chief Medical Officer Cees Rein van den Hoogenband said. "Her disappointment about not winning a medal in the roadrace is enormous. She is working hard to recover fully."

Several journalists have said on Twitter that they have heard reports she is OK — Reuters' acting global TV sports editor Iain Axon wrote that Dutch journalists at the Olympics were indicating she is OK, tennis writer Fabio Valente claimed she was on her way to the hospital but doing OK, and Dutch sports commentator Karl Vannieuwkerke wrote that she is conscious, but in shock.

After the awful crash, van Vleuten's teammate Anna van der Breggen sprinted forward to take home the gold medal before bursting into tears, likely both out of joy for her success as well as deep despair for her fellow cyclist. Van der Breggen told BBC, "I was pretty shocked about [van Vleuten's crash], I think she crashed hard. I realized I was first in the team and had to chase. We knew we had to do it."

Van Vleuten is also scheduled to compete in the cycling time trial on Wednesday, but it's unclear now if she'll be in good enough condition to compete. The descent of the Vista Chinesa also took down several cyclists the day before during the men's road race, reportedly leaving one athlete with a fractured iliac crest and one with a fractured shoulder, Cycling News reported.

The road race is 141 kilometers. Van Vleuten had only 10 kilometers left to go when she crashed.

More like this
Jake Daniels Just Became The UK’s First Active Football Player To Come Out As Gay Since 1990
By Sam Ramsden
What Is Jeanie Buss' Net Worth? The Lakers President Is Uber Rich
By Hugh McIntyre
How To Fight For Reproductive Rights, Based On How Much Time You Have
By Courtney Young
Rebekah Vardy & Coleen Rooney’s Trial Has Officially Begun
By Bustle UK
Get Even More From Bustle — Sign Up For The Newsletter