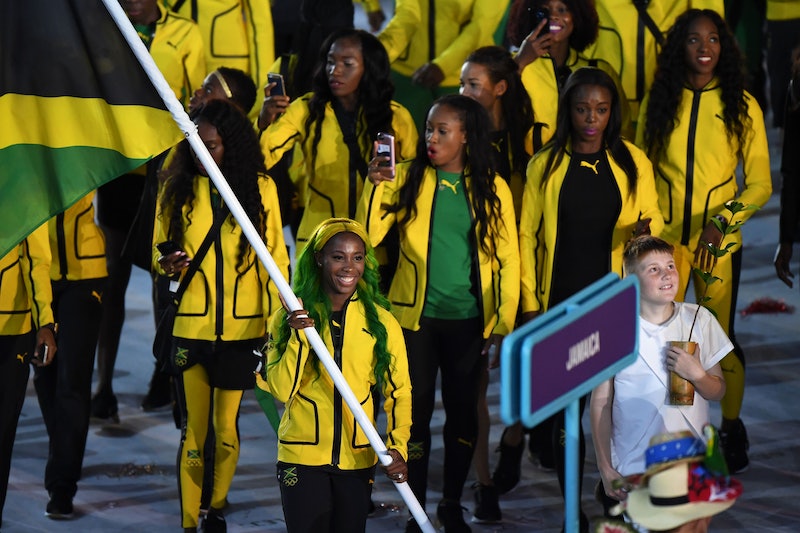 While Indonesia’s metallic blazers and Bermuda’s bright red shorts caught my eye at the 2016 Olympics Opening Ceremony, it was Jamaica’s flag bearer who showed everyone up with her patriotic mane. Shelly-Ann Fraser-Pryce’s 2016 Olympics hairstyle, as reported by Huffington Post, was not only patriotic, but also totally on-trend. And, from what I’ve peeped on the internet, the vote that Fraser-Pryce rocked the coolest hair at the 2016 Olympics Opening Ceremony seems pretty unanimous.

Dressed in Jamaica’s Opening Ceremony uniform of black leggings and a zip-up yellow hoodie, the nation's flag bearer and Olympic track and field sprinter accessorized her look with the most beautiful ombré hair that I have ever laid eyes on. Her mane — a yellow and green ombré dye job — matched her nation's flag and was most definitely the must-see style of the Aug. 5 commencement.

While Fraser-Pryce's patriotic 'do seemed to be planned as part of her Opening Ceremony costume, it looks as though it was a last-minute addition. She wrote on Instagram, "Big shout-out to @leeleefab for coming to my hotel on my short layover in Miami 11 p.m. so last minute lol and @andreag_hair for coloring the hair exactly how I wanted it. Then of course @chichairia #HairGoals2016 #cosmopolitan @cosmopolitan #Pryceless." Just when I thought Fraser-Pryce couldn't get any cooler, the fact that her patriotic hairstyle was done on a whim made things that much more fun.

While Fraser-Pryce's hairstyle was already perfection, she made it look even radder by topping it with a shiny gold headband. Her perfectly-curled long locks dyed in the colors of her country were total #hairgoals, and seeing that Fraser-Pryce has a history of fun hairdos, I can't wait to see how she styles her mane throughout the competitions.

Before she rocked the flyest hairstyle at the 2016 Olympics Opening Ceremony, Fraser-Pryce sported an equally amazing hairstyle back in 2015: Dark green braided tresses with a face-framing sunflower crown. It looks to me like this athlete has a thing for patriotic 'dos.

History shows that Fraser-Pryce enjoys a green hair dye every now and again. However, she also sported a pink 'do on the race track back in 2013. The hairstyle of note left the top of her hair dye-free while the bottom half of her locks were colored in an electric shade of pink. Needless to say, you couldn’t miss Fraser-Pryce's ponytail as she sped around the track.

From headbands to flower crowns and intricate braids and ribbons, I can only guess what Fraser-Pryce's ombré-colored locks will look like at her track and field competitions during the 2016 Olympics. If her past hairstyles are any indication, I am sure they'll be amazing.

With hair this good, I can only imagine what Fraser-Pryce is like on the race track.

More like this
How To Nail The Slicked-Back Bun (AKA Summer's Easiest Hairstyle)
By Olivia Rose Ferreiro
How To Master Baby Braids, According To TikTok
By Tomi Otekunrin
10 Swoon-Worthy Beauty Looks From The 2022 Cannes Red Carpet
By Olivia Rose Ferreiro
Ombré Hair Is The Lower-Maintenance Way To Play With Color
By Paris Giles
Get Even More From Bustle — Sign Up For The Newsletter