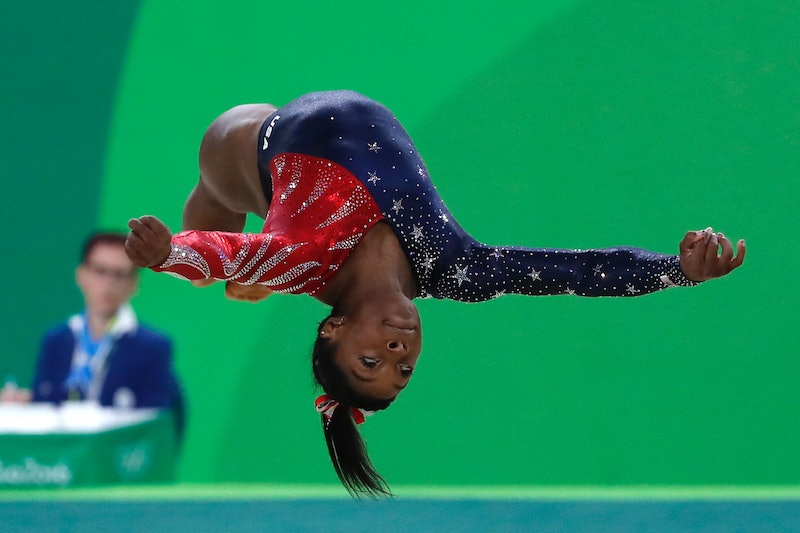 The 2016 Rio Olympics features more female athletes than ever before, and one of the most high-profile amongst them is Simone Biles. The 19-year-old American gymnast has already shattered several world records, and on Sunday, she made her debut in Rio. Even if you're not normally interested in gymnastics, you should probably watch Simone Biles' first Olympic performance, as it's nothing short of stunning and, at times, appears to defy several basic laws of physics.

Biles, an Ohio native, was too young to qualify for the 2012 Olympics, but made her senior debut the next year and has dominated women's gymnastics ever since. She has 14 world championship medals in gymnastics, more than any other American female athlete, and is the first woman to win the world championahip three years in a row. Ever since the 2013 PG&E championships, Biles has won every single all-around competition she's entered.

Biles was the first gymnast to perform a double layout with a half-twist and blind landing in competition, a move now known as "The Biles." Olympic gymnast Mary Lou Retton has said that the 4-foot-9 gymnast "may be the most talented gymnast" she's ever seen. Here's Biles' floor routine and official Olympics debut.

She went on to do the vault, and the result was arguably even more dazzling.

According to coach Aimee Boorman, one of Biles' greatest assets as a gymnast is her abbreviated run. What this means is that she doesn't have to spend as much time sprinting before she jumps into the air, and this gives her more time and physical space to complete her routines.

Biles first shoed an interest in gymnastics when she was six after a field trip to gym. She teamed up with Boorman a year later, and the two are still working together.

“I always say she’s like the second mom to me because she’s been there since I was like 8 years old, and so that’s 10 years that she’s always been by my side,” said Biles. “I’m very fortunate to have a coach that I got to stay with all this time."

Biles' achieved an all-around score of 62.336, more than three points higher than any non-US gymnast. She's now on track to break yet another record by becoming the first female gymnast to take home five gold metals from a single Olympics.

More like this
The David Beckham Qatar Controversy, Explained
By Sophie McEvoy
Raheem Sterling Had To Choose Between His Family & The World Cup
By Bustle UK
Romeo Beckham Shared A Sweet Farewell Note From “Proud” Sister Harper
By Sam Ramsden
Jude Bellingham’s Superstar Football Talent Runs In The Family
By Maxine Harrison
Get Even More From Bustle — Sign Up For The Newsletter