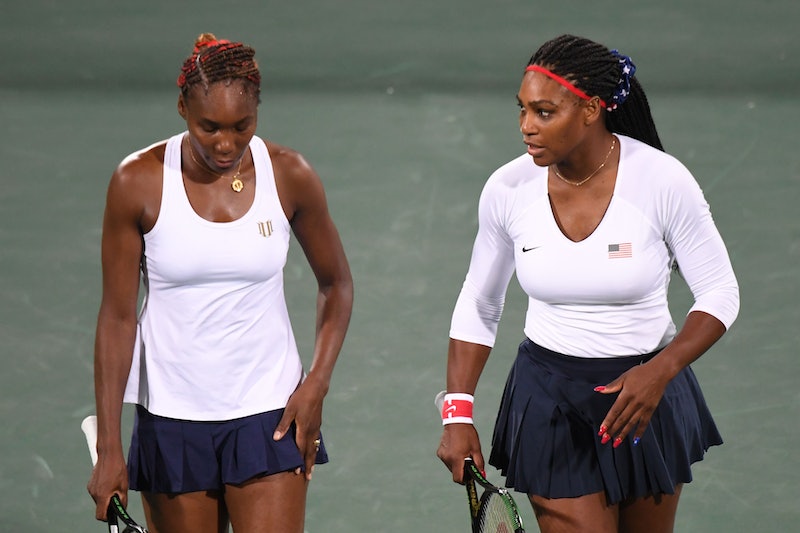 This was a first for the Williams sisters. In a doubles match against the Czech Republic at the 2016 Rio Olympics, Venus and Serena Williams lost. It was a shocking defeat. The Williamses have won three gold medals at three different Olympics over the years, but this year, the undefeated pair — who were given the No. 1 seed — lost in the very first round.

Playing against Lucie Safarova and Barbora Strycova, the sisters lost 6-3 6-4, ultimately being kicked out of the tournament. It was a second defeat for Venus, who also lost her first singles match to Kirsten Flipkens from Belgium the day before. Serena, however, won her match against Daria Gavrilova from Australia, and will continue on to a second round.

The Williamses had initially considered not playing their doubles round at all, due to Venus falling sick. Mary Joe Fernandez, the U.S. Women's Tennis coach, said Venus had "cramping, dehydration, and an upset stomach," NBC reported. She reportedly caught a virus last week at a tournament in Montreal and has been playing slowly ever since. Fernandez said:

A bit of bad luck and bad timing that everything came together at this juncture for her. But she fought. She gave it her best out there.

Venus and Serena Williams won gold medals in doubles tennis in 2000 at Sydney, in 2008 at Beijing, and in 2012 at London. They didn't play at the 2004 Olympics in Athens as Serena withdrew due to a knee injury.

But when they did play together, it was often a stunning sight; they're world famous for a reason. Just a month ago, they won doubles at Wimbledon, marking their sixth time taking that win and their 14th Grand Slam together, according to BBC. At the time, Venus said, "I never want to make a mistake. I don't want to let Serena down. She brought the energy from the singles on to the doubles court."

It's not easy to overcome an illness, however. To go from winning Wimbledon in July to losing the first Olympic match in August, clearly something happened in the past month to make the usually in-sync sisters play a bit off. While this was absolutely not the history they were likely looking to make in Rio, The Williamses can rest assured that they've made enough history for more than their lifetimes.