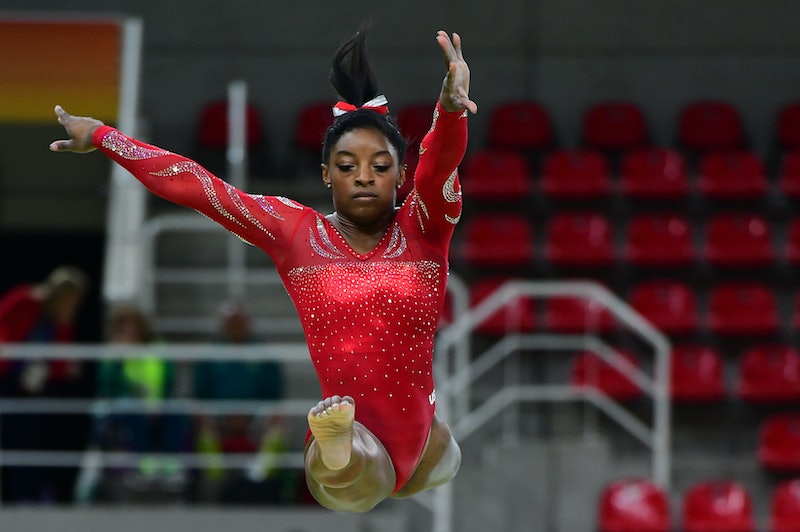 It's obviously exciting to watch the 2016 Rio Olympic Games — what's better than sitting back with drinks and snacks in hand while seeing athletes exhibit superhuman strength? (That's obviously a rhetorical question.) But this year's Olympics are incredibly exciting for another reason — Team U.S.A. is sending a record number of 292 women to Rio. It's the highest number of women who have ever competed at the Olympics for one country. But this isn't the first time America's women athletes have made history at the Games — at the 2012 London Olympics, U.S. women won more medals than men for the first time ever.

We've come a long way — after all, it was only in 1900 that women were permitted to compete in the modern day Olympics for the first time. Although the Olympics were only revived in 1896, the 1900 Paris Games weren't a great year for women — a total of 997 athletes across all countries competed, but only 22 of those competitors were women. The only sports at the Paris Olympics were tennis, sailing, croquet, equestrian and golf — but only golf and tennis had events specifically for women. In the decades since, the history of women competing in the Olympics is inspiring — so let's take a look at how far we've come over the past 116 years.

At the 1920 Summer Olympics in Antwerp, women made up just 2.4 percent of the entire number of participants. The U.S. brought home a total of 41 gold medals (the most of any participating country) — but only four of the first place medals went to women:

Women only competed in eight events within two sports at the 1920 Olympics, so they had an impressive showing given the circumstances.

At the 1924 Winter Olympic Games in France, women were basically absent from Team U.S.A.'s roster — 22 men and 2 women competed, and America's sole gold medal was won by Charles Jetraw for speed skating.

The 1952 Winter Olympics were held in Oslo and the United States only brought home four gold medals — but half of them were earned by women. Andrea Mead Lawrence won two gold medals for alpine skiing events, while the male gold medalists, Dick Button and Ken Henry, won for figure skating and speed skating, respectively. It's pretty inspiring that even though male competitors continued to outnumber women by a significant margin, there was an even split when it came to gold medals that year.

At the 1952 Summer Olympics, the United States sent 286 athletes to Helsinki, where they competed in 133 events. Forty-one women were on Team U.S.A. — so, although they were still outnumbered in a major way, there had definitely been some progress over the past three decades. This time, America brought home the most gold medals — 40 in total. But, due to the fact that women athletes were greatly outnumbered by men and they were only able to compete in 16.8 percent of the events, just a handful of these gold medals went to women:

At the 1972 Winter Olympics in Japan, the United States didn't have an amazing showing — but the women did. Although Team U.S.A. sent 77 men and 26 women to the games, every single gold medal was earned by a woman:

On June 23, 1972, the U.S. Department of Education's Office for Civil Rights passed Title IX. The law states that:

No person in the United States shall, on the basis of sex, be excluded from participation in, be denied the benefits of, or be subjected to discrimination under any education program or activity receiving Federal financial assistance.

This marked a major turning point in giving women the opportunity to live up to their potential and get the opportunities they deserved. Of course, 1972 wasn't a great year for U.S. women at the Summer Olympics, which began just two months after Title IX was passed. They brought home 23 medals, compared to 71 for men. (But, again, the United States sent 316 men and 84 women to the games.) Still, women managed to win an impressive number of gold medals once again — and they totally dominated in the pool.

Four years after Title IX passed, it was time for the 1976 Olympic Games in Austria, where 76 men and 30 women competed for Team U.S.A. We certainly hadn't reached parity, but it was a big step in representation. Although America only won three gold medals in Austria, two of them went to women:

At the 1976 Summer Olympics in Canada, 396 competitors represented the United States — 278 men and 118 women. America won 34 gold medals, but not many went to women:

On the surface this may seem disappointing, but Title IX had only been enacted a few years prior — so it would take time to see the full impact of the law.

Twenty years after the passage of Title IX, women dominated at the 1992 Winter Olympics in France. Once again, they were outnumbered by men, although not quite as dramatically as before — Team U.S.A. was comprised of 97 men and 50 women. The team won five gold medals and every single one was earned by a woman athlete:

At the 1992 Summer Olympics, America won 37 gold medals — 14 of which were earned by women. Again, Team U.S.A. was represented by 355 men and 190 women, so these results prove that women athletes are a force to be reckoned with, despite the odds.

Women once again had an amazing showing at the 1996 Summer Olympics in Atlanta. Out of the 646 competitors, there were 375 men and 271 women — and Team U.S.A. brought home 44 gold medals, 19 of which went to women. So, although women continued to be outnumbered, they more than held their own when it came to winning gold medals.

The 1996 Olympics were also important for women's soccer and women's gymnastics — both teams won gold medals in the all-around and it inspired young girls everywhere to pursue their Olympic dreams. In fact, 2016 gymnastics competitor Aly Raisman vividly remembers watching the 1996 games over and over again on a VHS tape owned by her mom.

At the 1998 Winter Olympics in Nagano, women were less outnumbered than before (105 men and 81 women were on the team). Of course, there were still technically fewer women competing — but that didn't stop them from winning the majority of America's six gold medals that year:

Here we are in the 21st century, and the representation of women at the Olympics has improved by leaps and bounds. At the 2012 London Olympics, not only did women bring home more medals than men — they were also responsible for 29 of the 46 Gold medals earned by Team U.S.A. This also marked the first year that women outnumbered men on Team U.S.A. — a pattern that has repeated itself in the 2016 Rio Games.

I know the amazing women athletes representing our country in Rio will make us proud — win or lose, their strength, work ethic, and perseverance is incredibly inspiring. And it's equally inspiring that women have begun to dominate a field that was once monopolized by men.