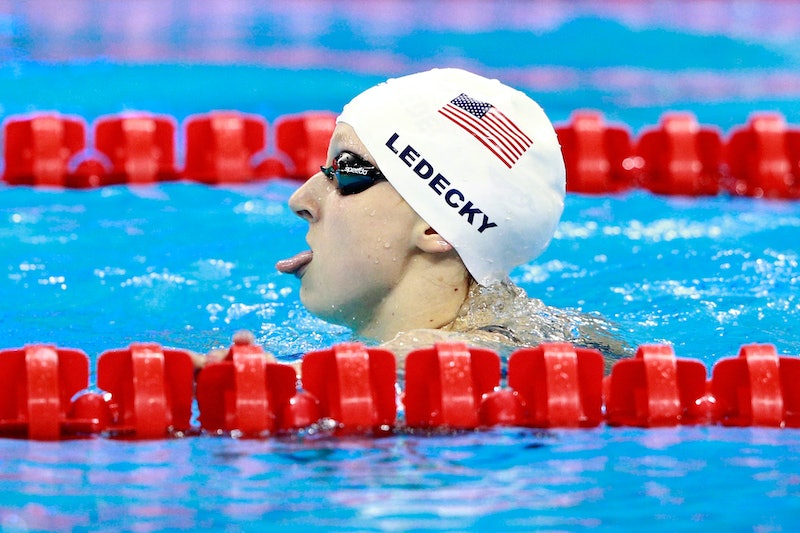 The American team at 2016 Rio Olympics includes Katie Ledecky, the 19-year-old swimmer and multiple world record-holder. Ledecky made her Olympics debut at the 2012 London games, where she broke the American record in the 800-meter freestyle and took home an unexpected gold medal in the process. Some of Ledecky's strongest supporters have been her parents, and a look back at their history shows that swimming is in her genes.

Ledecky was born in 1997 to David and Mary Gen. David is an attorney who studied at Harvard and Yale; several members of Ledecky's family are Harvard alums, including her uncle John and brother Michael, who graduated earlier this year. Ledecky's father worked at the law firm of Kirkland & Ellis until 2011, when he took time off to help coach his daughter.

Mary Gen (short for Genevieve) is a former associate administrator at Georgetown Hospital, and may be able to claim at least some responsibility for Ledecky's aptitude in swimming. Mary Gen began swimming as a teenager, continued in college and even qualified three times for the nationals as a student at the University of New Mexico.

In fact, one could plausibly place Ledecky's roots as a swimmer even higher up the family tree. Her maternal grandfather, Edward, was chairman of the city park board in Williston, North Dakota, and spearheaded the construction of a pool in the park that's now named after him. An Olympic-sized swimming pool at the town's recreation center also bears Edward's name.

Ledecky's upset victory in 2012 was all the more remarkable given that she was the youngest American athlete at the London games. She went on to win five gold medals at the 2015 world championships, and now holds all 10 of the 10 fastest-ever times in the women's 800 free.

At a preliminary round in Rio, Ledecky has set yet another record: She finished the 400-meter freestyle in a time of 3:58:71. That's short of the world record time, 3:58.37 — which she herself achieved at the 2014 Pan-Pacific Championships in Australia — but it's a record for the Olympics. At this rate, she'll may well set a couple of more before the Rio games are done. In fact, she went on to completely blow audiences away by winning the 400-meter freestyle on Sunday evening. She beat the competition by entire seconds — a margin that's not too common in Olympic swimming races.