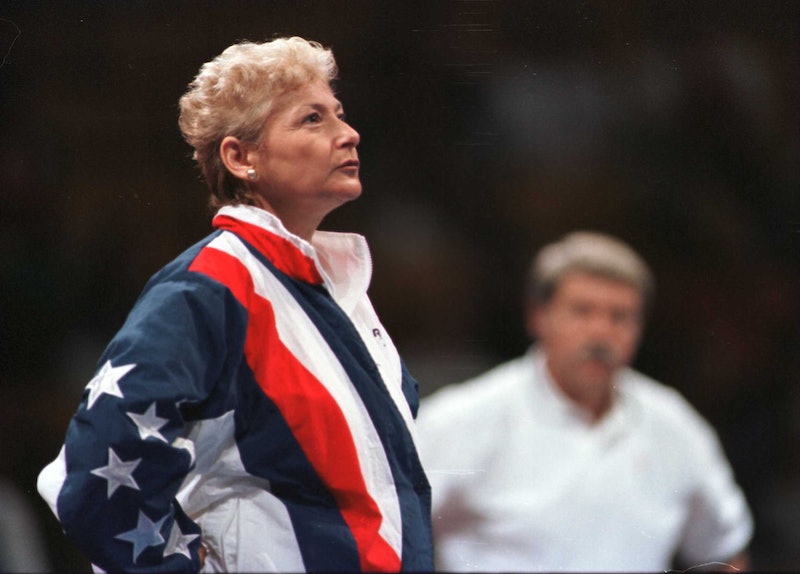 On Sunday evening, the U.S. women's team — which includes superstars like Simone Biles, Aly Raisman, and Gabby Douglas — won their subdivision and bested the Chinese team by nearly 10 points (185.238 to China's 175.279). Although the 2016 Fierce Five are among the best gymnasts in the world — and each of them is a gymnastics powerhouse in her own right — much of their success can be attributed to the national gymnastics team coordinator, Martha Karolyi. Karolyi and her husband, Bela, run a training camp called the Karolyi Ranch in Huntsville, Texas, which is an official training site for Team U.S.A. So who exactly is Karolyi, and how did she become the go-to coach for Olympic gymnasts?

Born in Odorheiu Secuiesc, Romania in 1942, Karolyi and her husband helped develop their native country's famous centralized women's gymnastics training program in the 1960s and 1970s. One of the couple's first gymnastics students was six-year-old Nadia Comăneci, the first gymnast in world history to be awarded a perfect score of 10 in an Olympic gymnastics event. Under the Karolyi's tutelage, Comăneci would go on to win three gold medals at the 1976 Summer Olympics in Montreal and two gold medals at the 1980 Summer Olympics in Moscow.

Just one year after Comăneci's 1980 victory in Moscow, the Karolyis defected from Romania and later moved to Houston, Texas, where they set up their first U.S. training camp. Due to their joint reputation as Comăneci's trainers, the Karolyis had no shortage of students: in the 1980s, they trained U.S. national champion Dianne Durham and Olympic gold medalists Mary Lou Retton and Julianne McNamara. Together, Martha and Bela have trained 9 Olympic champions, 15 world champions, 16 European medalists, and six U.S. national champions.

Most importantly, they've transformed the face of U.S. gymnastics, popularizing the centralized training camp system that brought success to Eastern Bloc athletes during the Soviet Era. For decades, the two have been an unstoppable gymnastics power-couple. In her book The End of the Perfect 10, author Dvora Meyers compared them to Beyoncé and Jay-Z. A documentary about their joint careers entitled Karolyi, will debut on NBC following this year's games.

Karolyi has a reputation for being strict. Just hours before the Sunday qualifiers, the Fierce Five were goofing around in the athletes' village cafeteria until Karolyi told them to quiet down: "Today is the Olympics. You have to be more serious."

In 1996, Karolyi was chosen as the head coach of the U.S. women's gymnastics team for the 1996 Olympics, bringing an end to her 1992 retirement. In fact, she's retired three times — in 1992, once again in 1996, and once more in 2000 — but she always seems to come back. At 73 years old, Karolyi has once again announced her plans to retire after the end of this year's Olympics in Rio de Janeiro. Nonetheless, her presence will continue to be felt: USA Gymnastics is set to purchase the Karolyis' training facility in Huntsville, Texas, and the trainer is sure to make an appearance every now and then.

Needless to say, Karolyi might be retiring, but she'll certainly be around in the future — especially if this year's U.S. gymnastics team proves to be as victorious as the nation hopes they will be.