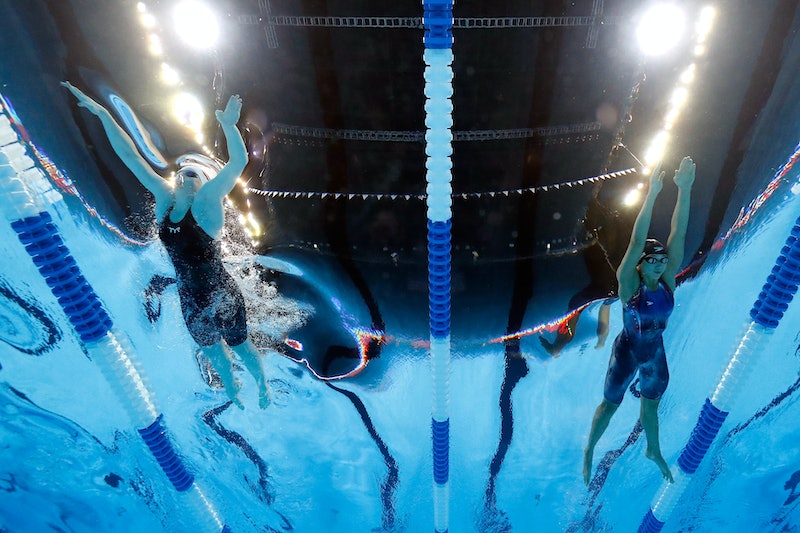 Of all the drama and excitement at the 2016 Olympics in Rio, one episode in particular has attracted the sort of attention usually reserved for tabloids. After Lilly King accused Yulia Efimova of doping, the seeds of a potential rivalry were planted among the American and Russian teams, respectively. It culminated in King giving Efimova a very critical finger-wag — the finger-wag seen 'round the world, perhaps.

Last May, Efimova failed a doping test. It wasn't the first time she'd been caught using performance-enhancing drugs that were prohibited, and as a result, the International Olympic Committee banned her from participating in this year's games. However, Efimova appealed to the Court of Arbitration for Sports (which is a thing), and at the eleventh hour, her ban was overturned and she was allowed to compete in Rio.

Never mind that Efimova was greeted with boos upon making her entrance. She ended up placing first in the semi-finals on Saturday, and to indicate that she was "number one," waved a singular finger in the air afterwards. This was a knock at King, who'd waved her own index finger after posting the quickest time in the preliminaries.

Efimova's victory display did not sit well with King, who was watching the event on TV from backstage (or back-pool, if you will). In response to Efimova, King waggled her own finger right back at Efimova, as if to say, "not so fast."

King then put her money where her mouth was — or, to be more precise, she put her arms where her finger was. King ended up finishing her race faster than Efimova, and in a post-race interview, she explained what that whole finger wag was about.

"You're shaking your finger, 'number one,'" King said of Efimova. "And you've been caught for drug cheating. I'm just not, you know, I'm not a fan." She also said that this sort of thing is "just kind of my personality," adding that "I'm not the sweet little girl."

"If I need to stir it up to a light a fire under my butt or anybody else's, then that's what I'm going to do," King said.

While it's perhaps a tad hyperbolic to claim that the two swimmers were "reviving a Cold War battle between the United States and Russia," it no doubt injected even more excitement into what was already a very exciting event. Sparks will surely fly when the two face off on Monday night.