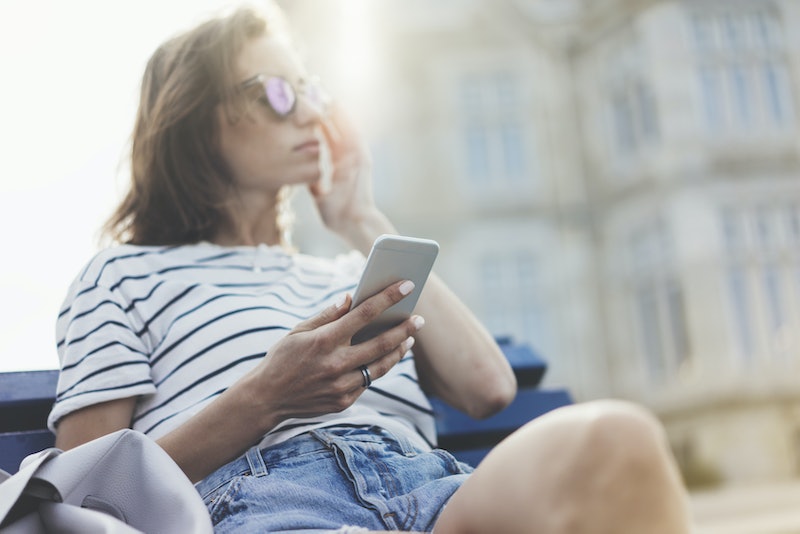 When I used dating apps in the past (mostly Bumble and Hinge), I would feel like the hottest thing ever when I got matches. It was definitely fun for a good while...until it wasn’t. The hits to my ego here and there (i.e. when a guy didn’t respond, when someone would ghost, when all they want from you is a late night sext buddy, etc.) didn’t make me feel particularly special or empowered in any way. And I'm not the only one. In fact, as a new study found, Tinder users are more likely to have lower levels of self-esteem than those who don’t and feeling objectified is just one of the problems.

"Online dating is based on looks because it's hard to portray personality through a profile," Janna Koretz, Psy.D., licensed psychologist, tells Bustle. "This also makes people self-conscious since they're being judged on looks more than they may have been if they had met their potential mate in person. But dating is pretty difficult and often makes people feel badly about themselves no matter where they meet.”

Researchers conducted surveys of 1,300 college students and asked them to rate how they felt about themselves through questions like, “How likely are you to make physical comparisons to others?” The answers to these questions measured body image and self-esteem. Then, everyone was asked if they used Tinder. The study, which was presented at the annual convention of the American Psychological Association found that people who used the app were more likely to think of themselves as sex objects in comparison to people who didn’t use the app.

Though, before looking at the findings, it's important to note the study sample here."Given that the authors of the study were measuring the interaction effects of Tinder use by gender, and that the sample of men and women who use Tinder was incredibly small (102: 70 female respondents and 32 male respondents), no statistically significant finding can be drawn about women or men who use Tinder relative to men or women who do not use Tinder or Tinder users generally," Jess Carbino, PhD, Tinder’s in-house relationship expert and sociologist says. "The sample is also highly limited in terms of the population the authors drew from to create their sample and not representative of Tinder's global user base: a state university in the Southeast and a state university in the Southwest."

According to the study, Tinder users were “less satisfied” with their faces and looks, “more ashamed” of their bodies, and were more likely to see themselves as sex objects. They were also likely to “internalize societal ideals about beauty,” compare their looks to others, and were self-conscious overall.

"Lots of women of all ages write me about ‘relationships’ they’ve found on Tinder," New York based relationship and etiquette expert, April Masini tells Bustle. "Usually their questions have to do with why he doesn’t call after having sex with them. Yes, that will hurt anyone’s self-esteem — but you have to consider that people who use Tinder and discount the hookup factor, are looking for a relationship shortcut. You don’t get to know someone you ‘swipe.’ And dating via swiping isn’t what people who roll up their sleeves and do the work typically do."

2. Both Men And Women Had Self-Esteem Issues

According to researchers, if a person used Tinder they reported more negative scores on self-esteem measurements. "This relationship between Tinder and self-esteem doesn't surprise me," Susan L. Edelman, Psychiatrist and Author of Be Your Own Brand Of Sexy, tells Bustle. "I'm quite concerned about the pressure on women (and now men too) to be sexy and sexual, and about how much we are judged on our appearance. It's not healthy."

According to Edelman, not only does it contribute to eating disorders and increasing plastic surgery rates, but nearly 60 percent of women are unhappy with their appearance, which reflects a high rate of low self-esteem. "The more we judge each other (and things like Tinder encourage that), the worse the problem becomes," Edelman says. "Now it's becoming more obvious that this emphasis on our looks is causing problems with dating and relationships."

3. Men On Tinder Had The Lowest Levels Of Self-Esteem Overall

Researchers believe this occurs because there are much more men than women using the app. Previous studies have found that women swipe a lot less often than men. When you swipe right more often, your risk of rejection goes up. Men are now put in a position that women usually find themselves in when it comes to dating, so it's like suddenly, they're the ones being "evaluated" and being judged on whether or not someone's interested in them because of their looks. Since men are more likely to get swiped left, researchers believe that can take a toll on them, especially for the younger ones.

4. It’s Uncertain Whether Tinder Causes Low Self-Esteem Or The Other Way Around

"Technically you can't draw any cause and effect conclusions from this study," Edelman tells Bustle. "So it does make you wonder if people who are more likely to be thinking of themselves as sex objects are willing to put themselves in a situation where they will be viewed as sex objects."

For instance, some people may not want to use Tinder where they will be judged almost solely on their appearance. They might be concerned that the men who contact them are more likely to be looking for a hookup, and/or aren't interested in them as a person. In that case, as Edelman says, they would probably choose a different dating site.

However, even if people are choosing Tinder because they already have lower self-esteem than people who choose other dating sites, Edelman thinks it's very possible that Tinder contributes to even lower self-esteem.

5. When It Comes Dating Apps, Consider Why You’re There

A poll conducted by secret-sharing app, Whisper found something that a lot of us probably know to be true—many people (66 percent) are guilty of matching with others on a dating app and then never talking and/or ignoring them. When you see stats like this, it really makes you stop and question the sincerity of its users. Even non-singles will admit to using the app for a confidence-boost.

However, if you're looking for an ego boost, the researchers noted, Tinder's probably not the place to do it. According to them, Tinder and dating apps aren't the best places to get some sort of validation that you're OK or attractive. As they suggest, looking to ourselves and close friends for that sort of validation is probably the best way to go.

“Wondering why someone has chosen Tinder is important,” Koretz tells Bustle. “For example if finding a mate is really important, it's likely the rejections experienced on Tinder will feel worse or more personal.

According to April Masini, online dating is a tool, and like any tool, you can use it sloppily or use it well. "There have been great relationships and marriages to come out of technology-based dating services — and there has been a lot of heartache too. Typically, the latter comes from a lack of self-knowledge going into a dating scenario," Masini says. "It’s easy to waste time when you don’t know yourself or worse, are trying to fool yourself that you’re someone you’re not. This causes relationship failures, and failure will easily lower self-esteem — whether it started out high, medium or low."

So it all depends on how you use it and what you're looking for. Before you swipe left, swipe right, message someone, or choose to ignore, maybe it's best to stop and think for a second — how does using a dating app make you feel?

Editor's Note: This post has been updated from its original version to include a statement from Tinder.