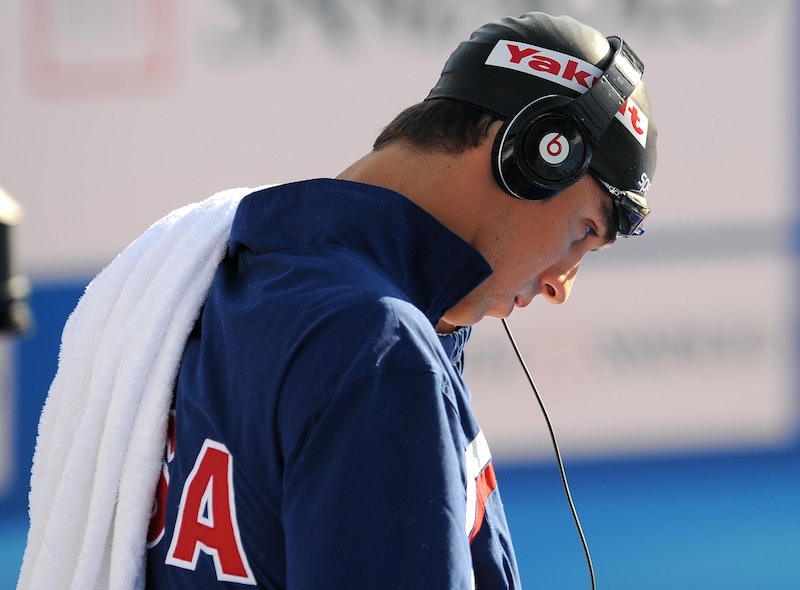 Sunday night Michael Phelps must have felt some serious déjà vu. This is the 19th time he's done so. But back up — before the team won the gold, before his leg of the 4x100 freestyle relay, Phelps was pumping himself up. With his headphones on, he was in the zone, preparing himself mentally for what was about to come.

This is nothing new for Phelps. He has done the same thing before every race for years — so much so that the songs on Phelps' pre-race playlist have been sought out time and again.

Luckily for you, back in 2012 he told Rolling Stone just who is streaming through his earbuds during his hours of training. The tracks are fast and motivating, with hits from artists like Lil Wayne and Young Jeezy. Tracks by Avicii and Afrojack and Steve Aoki made the cut too. Some of the favorites stretch all the way back to his 2008 Olympics in Beijing. But what would his playlist look like now at his fifth Olympics?

That's a good question. USA Today pointed out that Phelps didn't cry upon winning the medal, unlike some of his teammates; this is an old hat for him at this point, so he might be looking for consistency with his music selection, too. His faves Lil Wayne and Young Jeezy have released new albums in the last year. Jeezy's Church in These Streets came out in November and reached number four on the Billboard charts. Lil Wayne's Free Weezy Album came out last July. The single track "Glory" might be the perfect for Phelps, now that he's cemented himself as a 19-time medal winner.

While you're waiting to hear what's on this year's playlist, you can take comfort in the fact that Phelps (and much of the U.S. Olympic Team) has continued Carpool Karaoke. No Lil' Wayne or Young Jeezy. Instead, the first song you hear Phelps sing is country: "Chicken Fried" by the Zac Brown Band. It starts "You know I like my chicken fried. Cold beer on a Friday night." Not exactly his usual hip-hop playlist — but he knows the words nonetheless.

At one point Phelps gets a phone call from his mom. "Hey, Mom, we're doing Carpool Karaoke right now," he tells her, saying he'll call her back. What was on next? Miley Cyrus' "Party in the U.S.A." A party by Team USA. Whatever will be blasting through his earbuds these next days in Rio, he must have a pretty good selection. With 19 medals and counting, he's onto something.

More like this
What Is Jeanie Buss' Net Worth? The Lakers President Is Uber Rich
By Hugh McIntyre
Jake Daniels Just Became The UK’s First Active Football Player To Come Out As Gay Since 1990
By Sam Ramsden
Joe Alwyn Reacts To Taylor Swift Earning An NYU Doctorate In A Rare Interview
By Jake Viswanath and Nicole Pomarico
Harry Styles Addresses The Theory That His New Song "Daylight" Is About Taylor Swift
By Jake Viswanath
Get Even More From Bustle — Sign Up For The Newsletter