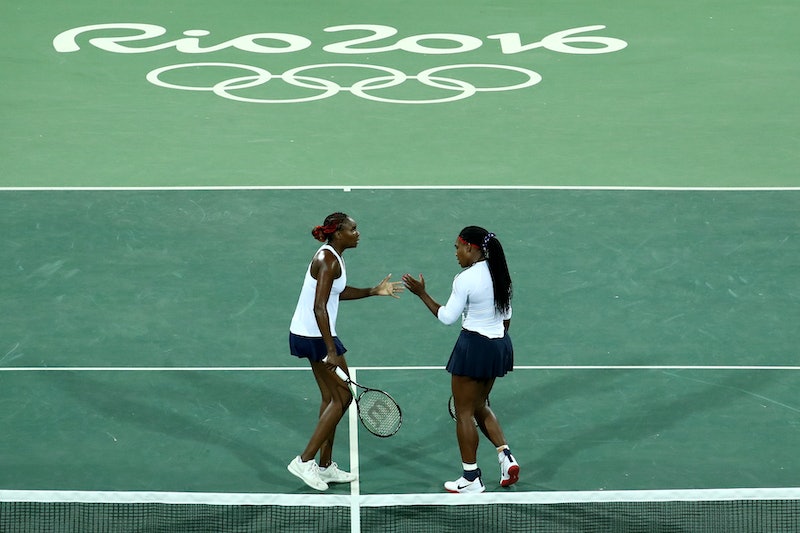 Every time the Williams sisters have competed in the Olympics doubles category, they have taken home the gold — first in 2000, then in 2008, and again in 2012. From Sydney to Beijing to London, they could do no wrong. They actually entered the Rio games undefeated in Olympic doubles matches. So it was a bit of a surprise that they ended Sunday losing 6-3 and 6-4. Definitely a disappointing beginning (and end) for the two tennis stars. But who beat Venus and Serena Williams? The winners of the match, Lucie Safarova and Barbora Strycova of the Czech Republic, had never even won a competitive match together.

In fact, Safarova and Strycova weren't even scheduled to play together at all. Strycova was a replacement for teammate Karolina Pliskova, who in the end didn't go to Rio. That makes her and Safarova a surprising success story at the games. They beat the number-one seeded doubles team after entering the competition unseeded themselves. They told the Associated Press that originally, they weren't excited to go up against the Williams sisters. "The draw could be better," Safarova told the AP. "But it was a challenge and we love challenges. We had nothing to lose. We stepped out there today and played a great game and deserved to win."

The match started strong for Strycova and Safarova. The first set was 6-3. Then in the second match, the Williams sisters briefly took the lead after staying even with the Czech team. But the Williams went on to lose 6-4. The sisters were not pleased, but they agreed that the Czech team did deserve to win. "I wasn’t playing the way I needed to play,” Serena told The Guardian. “I wasn’t crossing the way I need to cross ... We played terrible and it showed in the results."

So what else do we know about Strycova and Safarova? Obviously, the two are from the Czech Republic, and they are each competing in tennis doubles and singles at the Rio games. They have long careers in tennis, but they've never reached the Williams' level of play. Currently, Strycova is ranked 21st and Safarova 29th in the Women's Tennis Association rankings. Serena is currently first and Venus is sixth.

They weren't as practiced together as some doubles partners, but they have known each other for years. They had only played one match in a competition together. It was last year, and they lost. Still, Strycova was positive in her comments to The Guardian. "We’re good friends, and we know each other’s games," she told the paper.

Should they go on to win the tournament, they'll have Olympic gold medals to add to their reputation. For now, they'll be known as the two who beat the Williams sisters.

More like this
What Is Jeanie Buss' Net Worth? The Lakers President Is Uber Rich
By Hugh McIntyre
Chelsea Woody On Shattering Stereotypes In Surfing
By Leah Groth
The 10 Best Waterproof Watches For Swimming
By Lauren Moison
7 Exercises That'll Level Up Your Tennis Game
By Carolyn Steber
Get Even More From Bustle — Sign Up For The Newsletter