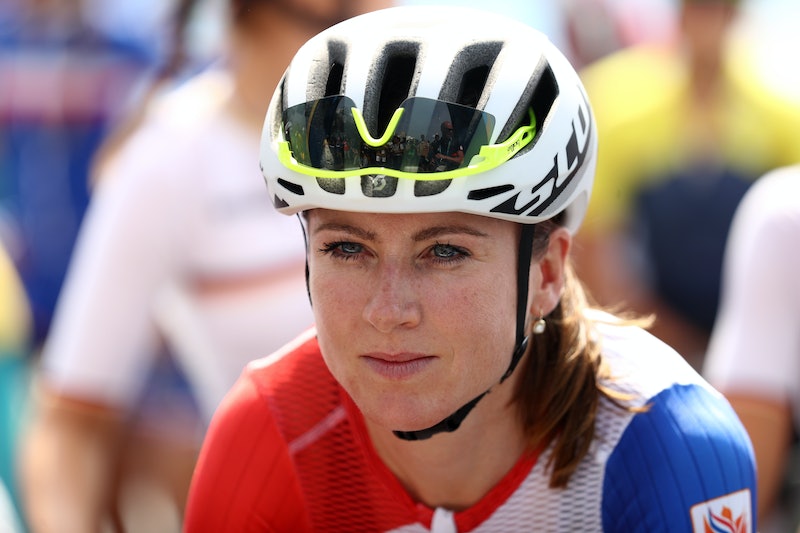 Annemiek van Vleuten was literally coasting to victory when she flew over her handlebars on the final descent of the women's biking road race at the Rio Olympic Games on Sunday. She had pulled ahead of the pack, but was thwarted by a sharp right turn. The initial pictures of the scene appeared grim, as she lay motionless on the track. But this update on Annemiek van Vleuten should assure you that she will fully recover. Update: Team Netherlands released a statement on van Vleuten's condition on Wednesday saying that she was well enough to leave the hospital after her crash on Sunday. "Considering the circumstances she is doing well," Chief Medical Officer Cees Rein van den Hoogenband said. "Her disappointment about not winning a medal in the roadrace is enormous. She is working hard to recover fully."

The Royal Dutch Cycling Federation confirmed to The Independent after the crash that van Vleuten had suffered a concussion and fractured her spine in three places. But that did not keep her off Twitter. She has sent out multiple messages to her fans, friends, and family since the crash. The first two messages came Sunday night Rio time, including one that was a thank you to her followers for the messages of support. The next expressed more of her disappointment: "I am now in the hospital with some injuries and fractures, but will be fine. Most of all super disappointed after best race of my career."

She sent a similar message Monday morning. At 5 a.m. local time, van Vleuten said that she was still waiting, but hoped to leave the hospital. Initial reports signaled 24 hours in intensive care, given the severity of the accident. "Knowing that this chance is 1 in 4 years, doesn't make it easy," she added.

The race course had a lot of sharp ascents and descents. Van Vleuten fell near the Vista Chinesa, an outlook above Rio's lagoon high up in the mountain. She was actually the second cyclist to fall in this area of the course. On Saturday, Vincenzo Nibali of Italy crashed along the same stretch and broke his collarbone.

Immediately after the crash, van Vleuten was unconscious, but she regained consciousness before being loaded into the ambulance. The chief doctor for the Dutch team, Cees Rein van den Hoogenban, said that initial scans looked OK. "Annemiek went through a total CT scan and is stable now. She suffers from a heavy concussion but there were no further abnormalities seen on the scan," he told Reuters, adding that her reactions are "adequate."

One former Olympian told BBC that the course was dangerous. Chris Boardman, a gold medalist from the 1992 Barcelona games, said:

I went down and had a look at the course and saw those edges. We knew it was way past being technical; it was dangerous. The people who designed the course and said what safety features were needed had seen it as well and left it.

It was actually one of van Vleuten's teammates who ultimately won the race: Anna van der Breggen. After the race, just before stepping up to the podium, van der Breggen was crying. USA Today reported that the silver and bronze medalists, from Sweden and Italy, respectively, attempted to console her.

Van Vleuten has been documenting the Netherlands' team's experience on Twitter since arriving in Rio. The posts, all fun and lighthearted before her crash, focused on life in the Olympic Village and her bike. She also sent a few out from the practice rides. Given the fun of the days leading up the race, and a near win, her recovery may be bittersweet in addition to painful.

More like this
Kourtney & Travis Crashed His Daughter’s TikTok Live In Their 2nd Wedding Outfits
By Grace Wehniainen
Chelsea Woody On Shattering Stereotypes In Surfing
By Leah Groth
Jake Daniels Just Became The UK’s First Active Football Player To Come Out As Gay Since 1990
By Sam Ramsden
What Is Jeanie Buss' Net Worth? The Lakers President Is Uber Rich
By Hugh McIntyre
Get Even More From Bustle — Sign Up For The Newsletter