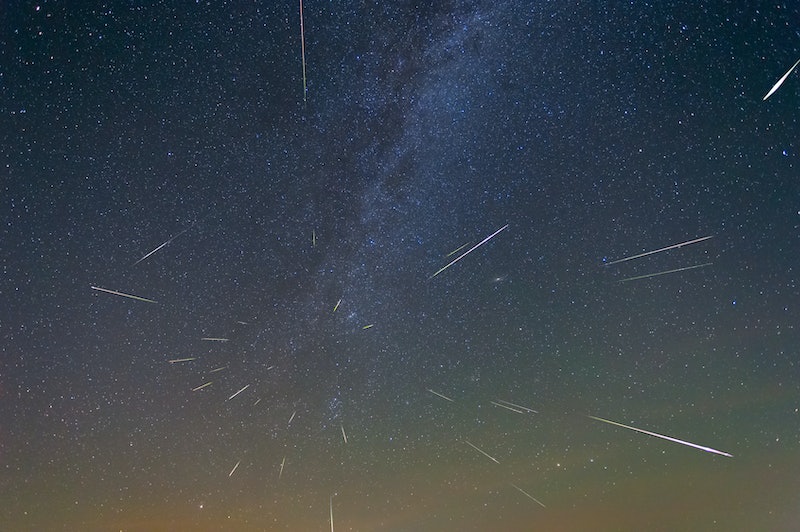 OK, guys, here's the game plan: The 2016 Perseid meteor shower is about to peak this week on Aug. 11 and 12. Meteor showers are comprised of what we colloquially call "falling stars." The world is currently a trash fire. Wishing on falling stars is good luck. If we all get our act together and collectively wish on what is set to be a historically beautiful meteor shower for what is currently happening to, uh, not happen anymore, something has to change, right? Guys? Right?

OK. Cool. I'll let you think on it. But in the meantime, let's talk a little about the Perseids anyway, because they're going to be absolutely phenomenal this year.

The Perseids are an annual meteor shower that has become a favorite for sky-watchers around the world for several reasons: It occurs in August, when people are living their best summer lives and sitting outside at 1 a.m. isn't the worst thing you could possibly do; and, it produces a higher percentage of bright and beautiful shooting stars than most of the other frequently occurring meteor showers. On an average year, you can expect to see around 100 meteors per hour at the Perseids' zenith. Granted, most of them are small, some of them are hidden by cloud cover, and a lot of them will be so quick that you just miss them — but this year? Oh, this year, the odds are in our favor.

The Perseids begin as specks of dust from the periodic Swift-Tuttle comet, which last entered the inner solar system in 1992. But Jupiter recently gave Swift-Tuttle a li'l nudge closer, and scientists are expecting the meteor count to hit upwards of 150 per hour — or more. Said Bill Cooke of NASA's Meteoroid Environments Office, "Forecasters are predicting a Perseid outburst this year with double normal rates on the night of Aug. 11-12. Under perfect conditions, rates could soar to 200 meteors per hour." That's an average of between three and four meteors per minute, you guys.

The best spots to watch the Perseids are, of course, free of as much light pollution as possible. We should begin to see some meteors the night of Aug. 11, with the peak beginning around 1 a.m. on Aug. 12 and continuing on towards dawn, giving us plenty of time for wishing on falling stars and reversing the decline of literally everything. If your boss is like, "Why are you so tired today?" you can just be like, "Um, you'll thank me soon. I hope."