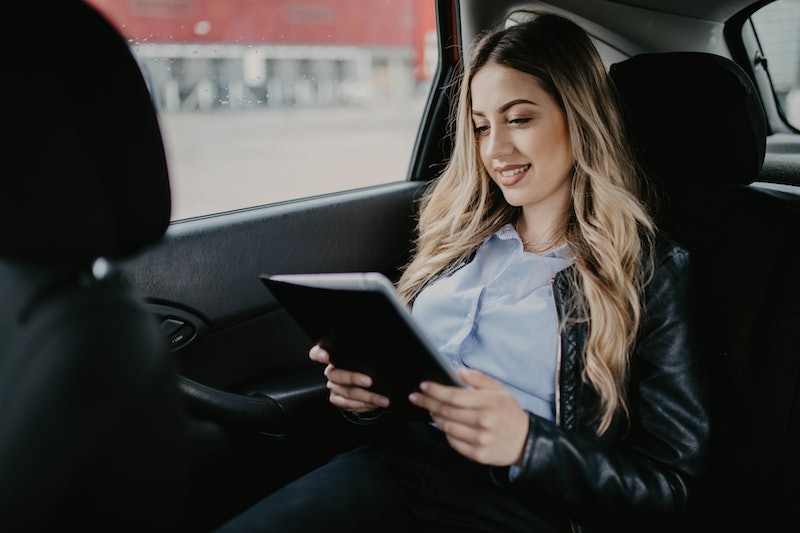 Most book-lovers are familiar with the feeling of trying to find out what happens next in the novel you're reading on a car ride — and then feeling like you're going to throw up. So why does reading in the car make you feel sick? Science has a theory.

At first glance, there doesn't seem to be anything about reading in car that should make someone carsick. After all, both reading and riding in a car are usually fine for most people. And yet, even though reading in the car is easy for some people, for others, it make them horribly carsick. So what gives?

As neuroscientist Dean Burnett explained in a recent NPR interview, it probably has to do with the way the brain processes information. When you're in a moving car, all the signals coming from your muscles say that you're not moving — but the fluid in your inner ear says otherwise. And it makes it hard for your poor thalamus, which is the part of the brain that processes sensory input, to figure out what is going. Fortunately, looking out the window is usually enough to help your brain figure it out. The visual evidence of moving tips the balance, so to speak, and helps the thalamus decide that, yes, you really are moving.

But when you read a book, you aren't looking out the window; you're looking at a small square of text. And that further confuses the brain.

So why does this make you feel sick? According to Burnett, the theory is that this particular mismatch of sensory information — your muscles saying that you're standing still while your inner ear saying you're moving — actually mimics the effects of some poisons, at least from the brain's perspective. And when you've been poisoned, the thing to do is to throw up and expel the poison. So, evolutionarily, that's just what humans are programmed to do. So carsickness is really your brain's way of trying to keep you from being poisoned.

Of course, that's not so helpful when all you really wanted to do was read a chapter or two.

The good news in all this is that most people outgrow this type of motion sickness. Which makes sense. Once you've experienced this sort of sensory mismatch enough times, your brain is able to recognize what's going on better and better. And for most people, eventually, your brain doesn't need you to constantly reassure it that you really are moving, not being poisoned. It's why kids are more likely to get carsick, and why some people who couldn't read in the car when they were younger now can as adults.

Unfortunately, there are also some people whose brains just never quite get the message, and who are prone to carsickness their whole lives. Sorry, guys.

For the rest of us, though, our brains just need some training until they get it. And if you do start feeling carsick while reading, just take a break to look out the window, or roll it down to feel the wind on your face, or anything else that might help you realize you're actually moving after all. And you should be fine.

More like this
Viserys’ Fate On 'House Of The Dragon' Could Differ From The Book In This Surprising Way
By Grace Wehniainen
Ling Ma Is Back — This Time, With Yetis
By Kate Dwyer
Romance Authors Are Mobilizing For Reproductive Rights
By Natalia Perez-Gonzalez
What Is A "Hot Girl Book" & Why Is Everyone Talking About Them?
By Samantha Leach
Get Even More From Bustle — Sign Up For The Newsletter