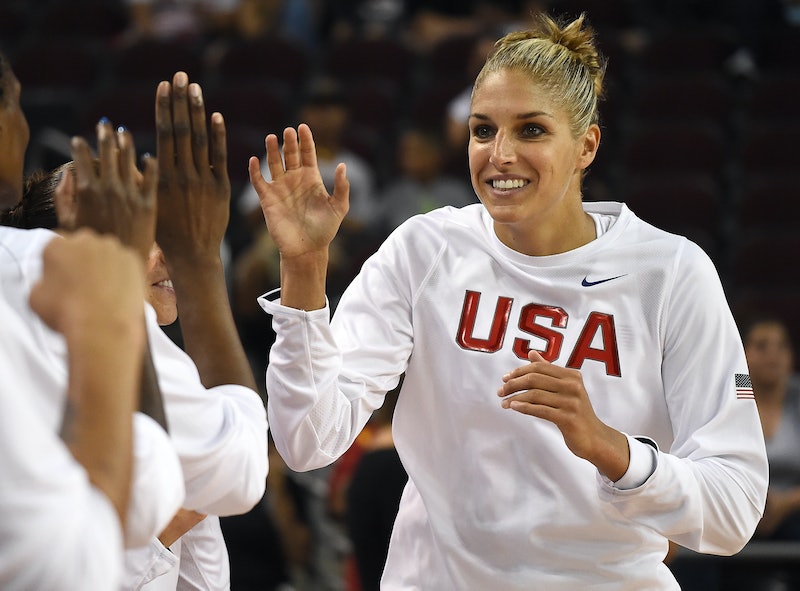 By the end their first match-up of the Olympic Games on Sunday, the USA Women's Basketball team already set three records. The final score in the game against Senegal was 121-56, which earned the team records in both points scored in a game and margin of victory. (The U.S. team set the previous record in 1996.)

The third accomplishment came when the women broke the number of assists in a game, with 36. Guard Diana Taurasi even tied her own Olympic record for number of three-pointers scored at five. USA Women's Basketball team has won gold the past five times at the Games — with 42 straight games won, they haven't lost an Olympics since 1992 — and are setting their sights on number six.

Defeating Senegal wasn't exactly a surprise — after all, it is only that country's second Olympics, and they are currently 0-7. But the number of records broken is a huge accomplishment for Team USA. The group is stacked with WNBA all-stars and MVPs, so they're an impressive bunch. This Olympic run is expected to be the last time Taurasi and Sue Bird will play together with U.S. coach Geno Auriemma, who started working with them during college at the University of Connecticut, according to ESPNW. Taurasi and Bird have both claimed four gold medals at the games with the U.S. team. They're a powerhouse duo who have also earned WNBA titles with their U.S. teams, the Seattle Storm and Phoenix Mercury, as well as international titles in the EuroLeague, where they've played for Russia.

The reduced pressure on the U.S. team during the game gave all 12 players the opportunity to get out on the court, including first-time Olympians Brittney Griner (Phoenix Mercury center), Elena Delle Donne (Chicago Sky guard-forward), and Breanna Stewart (Seattle Storm forward). Like Taurasi and Stweart, they are superstars who have also helped kickstart the team into their powerful opening. Stewart's three-pointer with three minutes left in the game sent the team past the previous points-per-game record of 114, made by the U.S. in a 2012 game against China. Griner and Delle Donne added 14 and 11 points to the team's total, respectively.

On August 8, the women go up against Spain in the second of eight games in the tournament, which might prove to be a closer battle. Here's hoping for more record-breaking games and another Olympic gold to add to Team USA's collection.