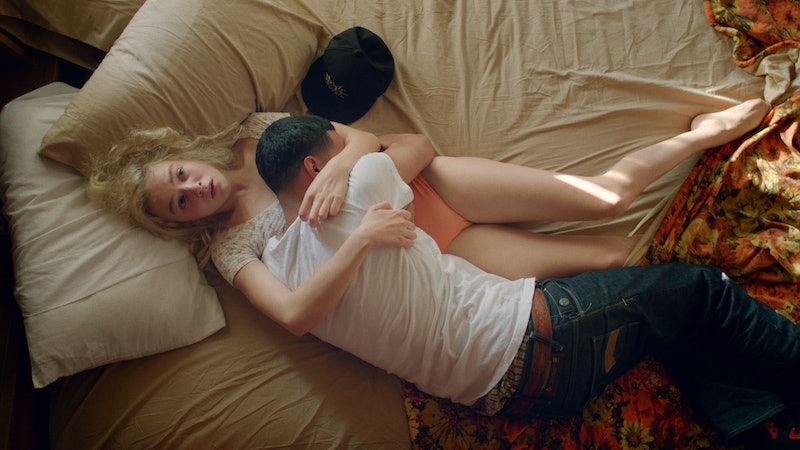 Coming-of-age tales aren't all sun-drenched first kisses and comfortable nostalgia. In the Sundance breakout White Girl , filmmaker Elizabeth Wood dramatizes her own late teen years partying and becoming immersed in the cocaine culture of a gentrifying New York City. ("Even while it was all happening, it felt like I was living in a movie," Wood told Variety.) Homeland actress Morgan Saylor plays Leah, a white college student who falls for her Queens neighbor, a Puerto Rican drug dealer who doesn't touch the stuff personally. Two worlds collide when Blue (Brian Marc) becomes the hook-up for the hipster media-types Leah's roommate knows through her internship. When a big deal goes bad, Leah takes up selling to earn the cash to fund Blue's legal defense.

White Girl is being compared to Harmony Korine's 1995 rebellious youth opus Kids for its frank depiction of sex and drug use. Wood's parents showed that film to her to discourage a certain kind of behavior, but their plan backfired. "It encouraged me to be worse behaved," the filmmaker told Vice. "Drugs! Sex! Cool! The danger of it was very appealing." While some viewers may be drawn to the theaters by White Girl's similarly graphic approach to that content, they'll also be exposed to the movie's aggressive exploration of race, class, and gender.

In this exclusive clip from White Girl, Leah approaches Blue and his friends on the corner looking to score. The boys are amused by Leah's boldness, though Blue cautions her about making such an interlude to crowd she doesn't know. ("For real, shorty, you can't be coming around asking strangers like that.") Leah is shocked, her assumptions about the boys on the corner challenged by Blue's refusal to engage with the college girl who just moved in across the street, even for a little cash. Even though Leah walks away empty-handed to the a chorus of snickers from Blue's companions, the chemistry between the two teenagers is obvious.

See all of Wood's raw and harrowing cinematic memoir when White Girl is released in select theaters Sept. 2.