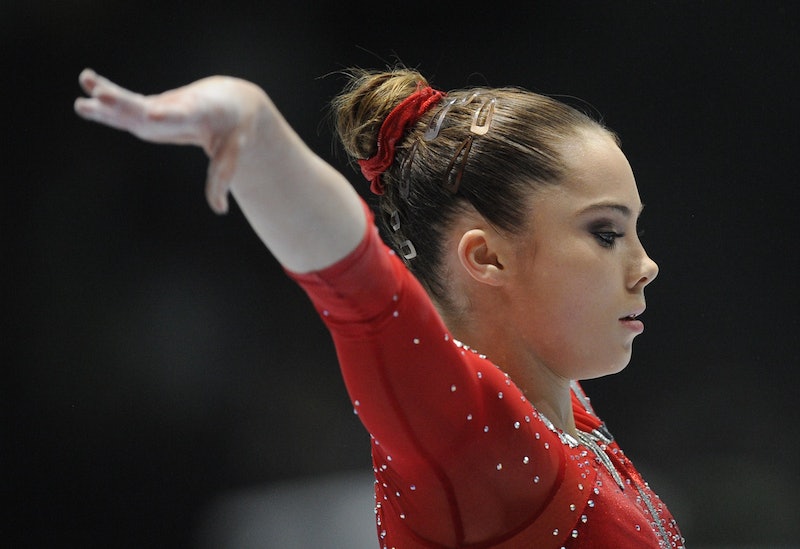 As the 2016 Rio Olympics are underway, we've already seen some impressive events from Team USA's women's gymnastics team. This year's team consists of Simone Biles, Gabby Douglas, Laurie Hernandez, Madison Kocian, and Aly Raisman, and this group of all-stars is one to watch. But as the Olympics gymnastics events unfold, you might be wondering why McKayla Maroney isn't competing. The Rio Olympics won't be seeing this member of 2012's "Fierce Five."

To be fair, Maroney isn't the only member of London's "Fierce Five" who isn't competing. Her teammates Kyla Ross and Jordyn Wieber have both left competitive gymnastics as well. But Maroney became a popular face after the "McKayla Maroney is not impressed" meme took off after a photo of her winning a silver rather than an expected gold on her vault event went viral.

So why isn't Maroney competing this year? Well, the 20-year-old has not competed in the sport since 2013, when she won a gold medal in vault at the world championships in Belgium. After multiple injuries, including a broken toe, a fractured shin, and a fractured tibia, as well as a series of other medical concerns, Maroney was unable to get back into the sport after her competition at Worlds.

In an interview with Gymcastic earlier this year, Maroney said, "Since October of 2014, I would go back to the gym and then burn myself out for 3 months. And I did that probably until a couple months ago. And I would go to doctor after doctor, and I got so many blood tests … I was so unhealthy and tired I couldn’t get out of bed. I got depressed." Unfortunately, her health issues also took a toll on her ability to train for the 2016 Olympics. "I was just holding on to that hope that I was going to make [the Olympics]. And I wanted to make it so bad. … But eventually you move on," she said in her interview.

But the gymnast doesn't want anyone to use the term "retired."

"I don’t want anybody to think that McKayla is retiring. I don't even want people to use that word. I got into gymnastics when I was 18 months old … and this is something I’m always going to be a part of it. I’m never leaving this sport. The only difference is I’m not competing anymore," she said in her interview with Gymcastic. But she'll still be cheering on her former teammates who are competing in Rio.

Since leaving the sport, Maroney has spent some time acting over the last few years, making appearances on Bones and Hart of Dixie. She is also currently working on a career in music.