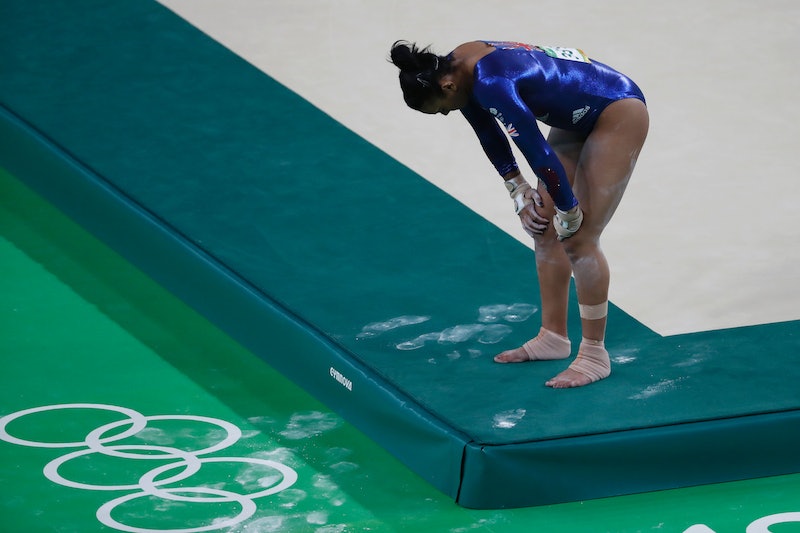 British gymnast Ellie Downie had a scary fall Sunday night which had many worried for the 17-year-old athlete's health. During the gymnastics team qualifiers in Rio, Downie landed on her neck after a misstep in a tumbling pass, and ended the event without finishing her routine. Despite the nasty-looking fall, Downie is OK, and she's expected to help Team Britain secure a medal in the team all-around.

Downie was competing on floor for the team qualifiers Sunday night when, in the middle of a tumbling pass, she fell on her neck after flipping midair. Downie was attempting a flip with two-and-a-half twists directly into a tucked front flip, and had a slightly unsteady landing in the middle of her pass, but attempted to recover and complete the movement into the second flip. However, her legs buckled underneath her, making it impossible for her to complete the full flip and land back on her feet. Downie came crashing down on her neck, then stood up as though she might continue the routine, but stepped off the competition floor just a few moments later without finishing.

"My legs just crumbled and I was nowhere near over so I just crunched on my neck and felt it crack a little bit," Downie told journalists after the fall. "It sounds pretty gross but I just felt dizzy before my last tumble. They put me in a wheelchair and I was like, 'I don't need a wheelchair.' I was better than I thought, so I came back out and vaulted."

Amazingly, Downie dusted herself off and went back to the competition floor to finish her vault, scoring an impressive 14.833 — one of the strongest vaulting scores in the meet. Vault has historically been one of Downie's strongest events — she placed fourth on the apparatus in the 2015 World Championships, and was expected to have a repeat performance in Rio. It's no surprise that Downie was able to throw a spectacular vault, but it is even more impressive after her close call.

Downie ended up in 12th place at the end of the night, meaning she has a good chance to compete in the individual all-around. Although Simone Biles is heavily tipped to win that event, after her courageous return to the competition floor, Downie should be one of the crowd favorites when the program begins on Thursday.

Now that Downie is apparently feeling better, Team Britain has a chance to come back and win a silver medal at the team all-around competition. GB finished fourth in the qualifiers, after the American, Russian, and Chinese teams, and is well within range of taking second place — the real competition for Tuesday. Team USA finished the qualifying round nearly 10 points ahead of second-place China, and is expected to surpass the other teams during the final. But with Downie healthy and strong again, Britain could make a go at the medal podium.