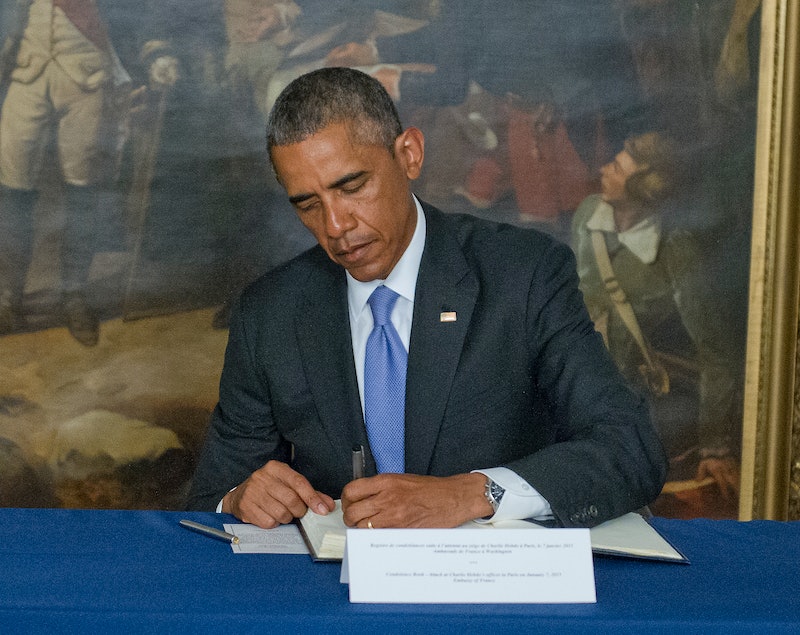 August 13 is Left Handers Day, and it's a good time to reflect on the very strange time left-handed people have had in history. Left-handedness remains, in many countries, a slight drawback; there doesn't appear to be anything to the gossip that left-handedness could be a cause for divorce in Japan in the mid-20th century, but it is true that many schoolchildren have been coaxed over generations to adopt right-handed ways rather than stick with their original left-handedness. (My dad was one of them.) It hasn't been all bad; left-handed aspects of life have meant good luck for certain cultures. The stigma has come a long way — President Obama himself is left-handed — but it's definitely been decidedly peculiar ride for left-handed people in history.

The rarity of left-handed people appears to be due to the tendency for species to evolve both cooperative and competitive traits, according to a Northwestern University study from 2012; the 90-10 split in right-to-left-handed has remained fairly constant across recent human history for this reason. The majority of us tend to cooperate and be right-handed, but left-handedness might give us a little competitive edge, which is why it's not disappeared from the gene pool. (And no, it doesn't actually come from the Devil, in case your superstitious great-aunt is still giving you a weird look when you use your left hand to spike your peas.)

Here's to left-handed history, in which criminals, kings, and baseball players all played a rather peculiar role.

1. That Criminals Were More Often Left-Handed

One of the most outstandingly bonkers beliefs about left-handedness appeared in the early 20th century, as the brainchild of Italian criminologist Cesare Lombroso. In a scientific paper published in 1903, he claimed to have discovered that left-handedness was a sign of moral degeneracy, and that “criminals are more often left-handed than honest men, and lunatics are more sensitively left-sided than either of the other two.” Lombroso's entire philosophy of crime was based on the idea that biology could create certain moral characteristics, a way of thinking that remained popular for decades. According to Jack Paraskovich's The Wrong View Of History, this idea wasn't even unique to Lombroso; there was allegedly a French criminal case in 1850 where a farmhand was convicted of murder largely on the basis of his left-handedness.

We do know that there's some cognitive divide between left- and right-handed people (left-handers tend to have better spatial ability and working memory, for instance), but criminality is not one of them.

2. That Left-Handedness Was Characteristic of "Lower Races" & Women

The scientist Gaetan Delaunay, writing in 1882, was determined to prove his pet thesis: that right-hemisphere dominance (which he believed caused left-handedness) occurred in "inferior" people, like white women, children, and men of color, while right-handedness denoted a more evolved, "superior" human being. He explained that he'd detected left-side bias in everything from dance to walking and jumping in his "inferior" group of people (which, of course, included the lower classes), and that everybody knew left-handedness was common in imbeciles, criminals, epileptics, and women.

His point? Evolution was gradually weeding out left-handedness among what he called "the higher races," specifically their men. (Lombroso, you will not be surprised to know, wholeheartedly approved of this whole idea.) Us ladies and our silly left-handed nonsense. Hilariously enough, science now knows that left-handedness is actually more common in men than in women.

3. That An Unequal Marriage Was A Left-Handed Marriage

Ever hear of morganatic marriage? It was a pretty detestable practice among the royal classes of Europe for several centuries, in which a person of high rank (usually a dude) could marry a person of lesser rank (usually a lady) without giving her, or their kids, any right to inherit the higher-ranked person's title, lands, money or, well, anything. Morganatic marriage also meant that the wife didn't attain any new titles or powers; it's derived from an old German word meaning "morning gift," or the gift given to a wife on the morning of her wedding. In a morganatic marriage, the bride didn't get anything else.

And, to reflect the shame and lower status of basically everybody involved, it had another name: "left-handed marriage," as the groom gave his left hand to his bride rather than his right to confirm that she would gain nothing beyond a wedding ring from the entire business. Interestingly, the commoner Kate Middleton, Prince William's wife, will be called "Princess Consort" rather than "Queen" when he gets the throne, even though she'll inherit all his wealth if he dies. Morganatic marriage is still around.

This myth dates from much later than the 1880s: 1988, to be precise. It's rooted in a paper published in Nature called "Do right-handers live longer?", which studied dead baseball players and caused a massive storm at the time; were left-handers doomed, as the scientists Diane Halpern and Stanley Coren alleged, to a shorter life span purely through the consequence of their handedness? Well, as Psychology Today pointed out in 2013, probably not so much. Halpern and Coren did find that left-handers in the 20th century tended to live for shorter amounts of time, but that seems to be something to do with the rise in left-handers being born: there's been a marked rise in left-handed births over the course of the century.

It seems that, statistically, left-handers will simply be likely to be younger overall as they're more likely to have been born later in the century. Their rates of "early" death aren't actually a mark of inherent doom, just a mark of a young cohort in general. Psychology Today also explained out, comfortingly, that a giant study of 21,000 patients (not just basketball players) found no correlation between left-handedness and early death.