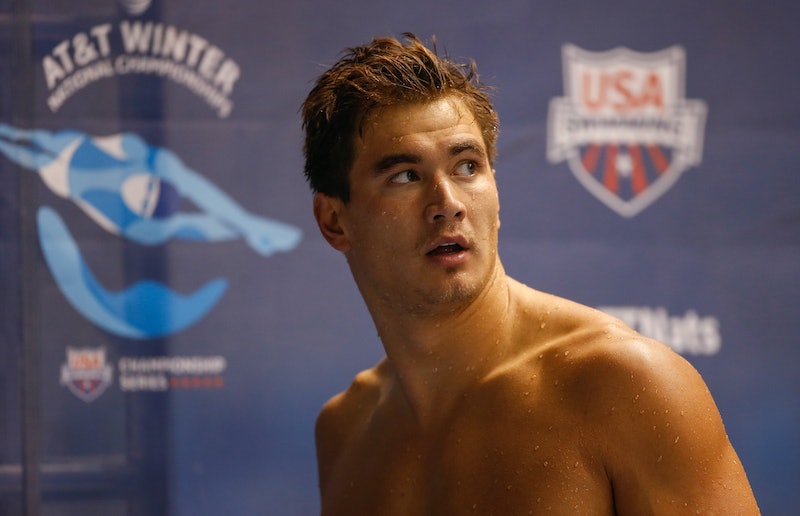 The U.S. Olympic swim team is already off to a brilliant start at the 2016 Olympic Games in Rio. On Aug. 7, the men's team won the gold medal in the 4x100m freestyle relay thanks to its incredible team members Michael Phelps, Caeleb Dressel, Ryan Held, and Nathan Adrian. In the London 2012 Olympics, Adrian won the individual gold medal in 100m freestyle, and the 6'6" swimmer also won over many swooning hearts. I mean, look at that face! That hair! That smile! And yeah, that talent. After I watched their amazing win in the freestyle relay, I couldn't help and be curious as to wether Nathan Adrian was single. You know, just to weigh my chances.

Although he was previously in a relationship, Adrian is currently single, and it is still a sensitive subject for the swimmer. On July 30, People shared a video interview with the 27-year-old in which he was asked about the struggles of dating as an elite athlete. He looked coy and reserved before confessing, "I got to word this correctly... I just came out of a relationship, so..." and proceeded to nervously take a sip of his drink. He continued in the interview, "Dating as an Olympic athlete is extremely hard. The levels of empathy have to be high in a partner if you are able to have a relationship."

Just a mere month before his People interview, on June 27, Cosmopolitan spoke with Adrian ahead of his revealing appearance in the 2016 ESPN magazine's Body Issue, and he was still in a relationship at that point. Adrian telling People that he was recently out of a relationship almost sounds like an understatement. Cosmopolitan asked Adrian if he was worried about Zika virus and being sexually active at the infamous Olympic Village, and he said,

"No, because I have a girlfriend and she isn't going. I would love to share the experience with her, but if security threats or Zika is as big of a deal as they say, then I'd rather her sacrifice the experience than risk her safety. And on top of that, she has a full-time job with limited vacation time. If we go somewhere, I'd rather spend time with her than send her to a pool to watch me from a distance."

For curiosities sake, who was Adrian dating right before the Rio Olympics? According to PlayerWives, he was dating Hallie Ivester since at least August 2013. Ivester was a swimmer at Stanford University, but little is known about her publicly because her social media is mostly private. Her Facebook does show photos of herself and Adrian, dating back to a romantic vacation in Indonesia in 2014. A LinkedIn page that appears to belong to her reveals that she is a Senior Merchant for Gap, Inc., so this very well could be the full-time job that would prevent her from flying to Rio de Janeiro.

Adrian and Ivester's breakup does look to be very recent, so there is no telling how this will all develop. Although he may be going through some personal breakups in his private life, it's pretty clear that Adrian is fully focused and, for now, only has his eyes and mind set on more Olympic gold this summer.