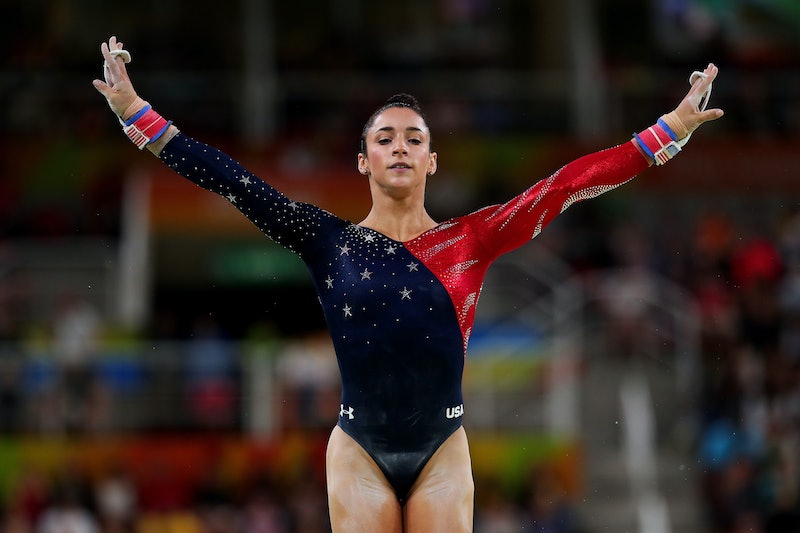 For most of us riveted to women's gymnastics at the Olympics, all eyes are on the gymnasts themselves. But when it comes to Aly Raisman, in addition to watching her kill it on the floor, the beam, the uneven bars, and the vault, people everywhere are also watching her parents, who get so into the whole thing they can barely sit still and are instead leaning all over the place, bracing themselves for every one of their daughter's moves. Raisman's parents' reactions made headlines during the 2012 Olympics in London, and they're once again going viral in Rio this year — particularly as they watched her on the uneven bars during the all-around qualifications on Sunday. (Much to her parents' relief, I'm sure, Raisman placed second out of all of the gymnasts and qualified for the all-around competition).

Lynn and Rick Raisman were seriously on edge on Sunday, squirming around all over the place as they watched their daughter on the uneven bars, knowing her every move inside and out, barely able to contain themselves (or even watch) as she swung from bar to bar. The Raismans' reactions were so hilariously over the top that it seriously doesn't even look like they're watching gymnastics — more like they're on some kinda roller coaster that only they can see:

Of course, this is really just par for the course for the Raisman family. Just look at their reaction four years ago in London: Lynn can barely stand to watch she's so invested, and Rick is practically biting his nails throughout the whole routine, only breathing a sigh of relief (and letting out a triumphant yell) after his daughter nails it:

As for what Raisman herself thinks of her parents' faces, she clearly finds the whole thing pretty hilarious — and has spent a good portion of Monday retweeting memes about it on Twitter:

More like this
Jake Daniels Just Became The UK’s First Active Football Player To Come Out As Gay Since 1990
By Sam Ramsden
What Is Jeanie Buss' Net Worth? The Lakers President Is Uber Rich
By Hugh McIntyre
Twitter Is In Utter Meltdown After 'Derry Girls’ “Poignant” Finale
By Sam Ramsden
The WAGatha Christie WhatsApp Messages Have Been Released — & They're Wild
By Sam Ramsden
Get Even More From Bustle — Sign Up For The Newsletter