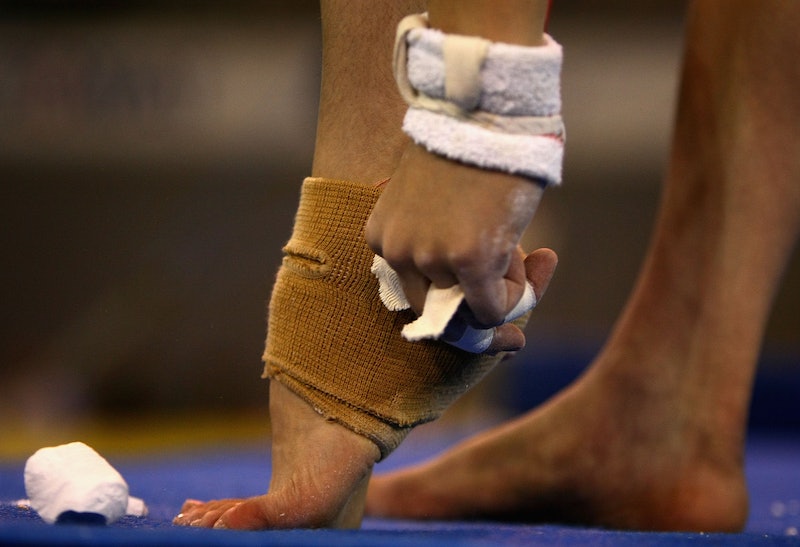 I don't know about you, but my absolute favorite events to watch during the Olympic Games are the gymnasts' performances, since they blend the grace and rhythm of dance with the athleticism of rock climbing. I also love the complicated ceremony of it all: the tight buns that each gymnast slicks her hair into, the poses at the beginning and end, the chalk flying from the athletes' hands, and the tape they always seem to have wrapped around their ankles. But why do gymnasts tape their ankles, anyway?

The tape, by the way, is actually called pre-wrap, and most professional gymnasts use it underneath sports tape. Pre-wrap is made from foam, which creates a cushioned barrier between the sports tape and the skin of the ankle. After all, if you were a gymnast, would you want to go around pulling tape off your ankles every day? No. No, you wouldn't.

If you've ever seen a gymnast's routine, you know that the athletes are capable of flinging their bodies in seemingly impossible arcs over bars and beams. But those moves take a toll on sensitive fingers and toes. The chalk gymnasts use increases finger grip, preventing injury to the hand and finger joints. Pre-wrap prevents skin tears caused by the impact that gymnasts make when they hit the ground after a routine. This injury is appropriately called a toe split, and it's not something you want plaguing you when you're trying to nab a gold medal. Veteran gymnast Rachel Gowey told Brit + Co, "I always have my grips, pre-wrap tape, my wrist guards and my band to stretch my shoulders" in her gym bag.

In addition, gymnasts can use colored pre-wrap as a fashion statement, although women use the colored variety more than men. This year, though, the U.S. team seems to be going with neutral pre-wrap, which you can see Gabby Douglas and Aly Raisman wearing in the photo below.