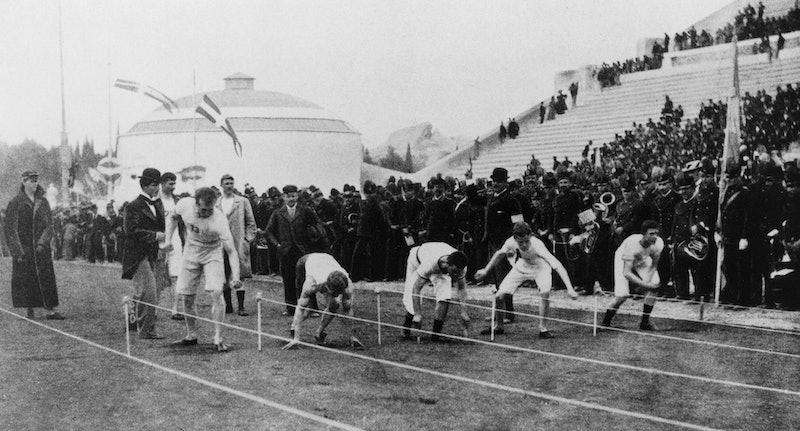 It's hard to watch the Olympic Games and not swell with a sense of pride in your country — or the world at large for coming together for this time-honored tradition. Have you ever stopped to wonder when the first modern Olympic Games were, though? Right now competition is waging fiercely in Rio. But 120 years ago this year, athletes from 13 nations were gathering in Greece at the opening of the first modern Olympics as we know it.

To be clear, the Athens Games of 1896 weren't the first Olympic Games on record. Rather, according to History.com, that honor goes to the competition held at Olympia (a-ha!) in the Greek city-state of Elis in 776 B.C (although historians believe the Olympic Games actually stretched back as much as 500 years prior to that, yet simply hadn't been documented). In Ancient Greece, the Games coincided with a religious festival paying homage to the Greek god Zeus; however, the revered competition then hit a major bump in the road when it was banned by Roman Emperor Theodosius I, remaining that way for 1500 years. It wasn't until 1892 that a clever guy by the name of Pierre de Coubertin came along and said, "Hey, you guys, let's make this thing official." OK, so I may be paraphrasing a bit — but de Coubertin did propose they bring back the Olympics as a major international competition that would take place every four years.

Long story short, the 70 voting delegates from nine countries were like, "Yo, de Coubertin ... good thinkin', guy." Well, basically. What they actually said was yes, voting unanimously to push the Olympic Games idea forward. This led to the formation of the International Olympic Committee, or IOC, and the subsequent planning of the 1896 Olympic Games in Athens, Greece from April 6 to April 15.

A fascinating case study, the 1896 Olympic Games included 241 athletes from 14 countries competing in 43 events, according to Olympic.org. One particularly notable participant was Hungarian architecture student turned Olympic swimmer Alfred Hajos, dubbed "the Hungarian Dolphin" by the press. Hajos, who became a strong swimmer at the age of 13 after his father drowned in the Danube River, secured victories in the 100m and the 1,200m freestyle events — the latter of which entailed being dropped off by boat out to sea and being abandoned to swim back to shore. "My will to live completely overcame my desire to win," he later admitted. His wins made him the youngest champion of the inaugural Games.

As for the very first Olympic win in more than 1,500 years, well, that honor went to American James Connolly. On the first day of the competition, his win in the triple jump made him a shoe-in for history books. Interestingly, it was a feat which came very close to never happening. At the time of the Games, Connolly was an undergraduate at Harvard University. When he requested a leave of absence to compete, he was initially denied. In order to gain permission, he actually had to request an honorable withdrawal as a student from the prestigious school. Considering his accomplishments — Connolly also won silver in the high jump and bronze in the long jump — it's safe to say the withdrawal was worth its weight in, you know, gold.

In total, 280 participants from 13 nations around the globe met in Athens to compete in 43 events as part of the first modern Olympic Games, History.com also notes. These events included cycling, fencing, gymnastics, shooting, swimming, tennis, track and field, weightlifting, and wrestling. It bears mentioning that all of the competitors were men (boooooo, patriarchy!). It was a stellar showing for Americans, who won nine out of 12 of the events that took place during the 1896 Olympics.

These games also marked the first time a marathon was covered in the competition. Fun fact? The route mapped out for the marathon was the same one 25-mile trek run in 490 B.C. by a Greek soldier bringing news to Athens of a victory over the Persians. It seems like kismet, then, that the very first Olympic marathon winner was also a Greek: 24-year-old shepherd-slash-runner Spyridon Louis. And, remarkably, he did so wearing a pair of shoes donated by his fellow villagers.

The 2016 Games in Rio are the 120th anniversary of the Olympics as we know it — and honestly, that's pretty remarkable. Let's hear it for the more than 11,000 athletes competing this year, and here's to 120 more years of awesomeness!

More like this
25 Quotes About Love To Share During Pride Month 2022
By Madeleine Aggeler and Emma Garza
How To See The Lunar Eclipse On May 15-16, 2022
By Kaitlyn Wylde
Jake Daniels Just Became The UK’s First Active Football Player To Come Out As Gay Since 1990
By Sam Ramsden
Photos Of Boris Johnson Drinking At A Downing Street Lockdown Party Have Surfaced
By Bustle UK
Get Even More From Bustle — Sign Up For The Newsletter