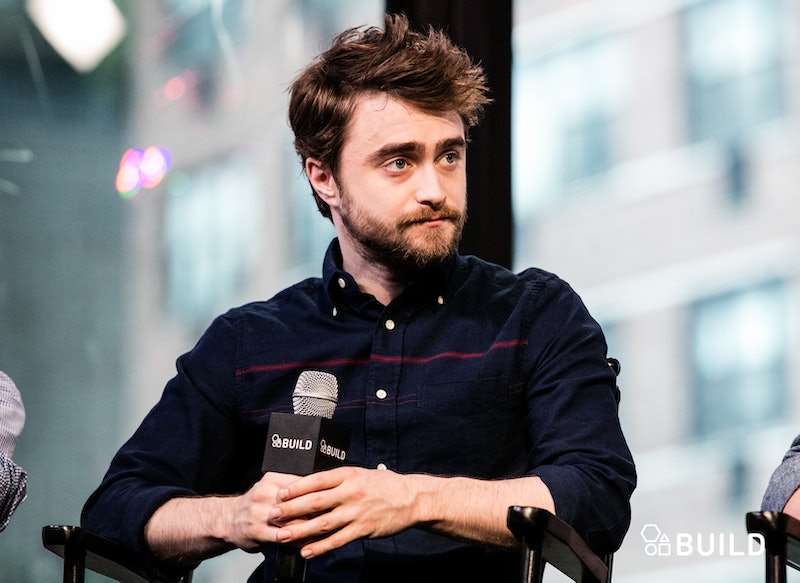 It's hard for a statement like "Daniel Radcliffe's latest role is totally unexpected" to not sound cliché, since many people still think that any role that isn't Harry Potter is a surprise for the actor. But seriously, Radcliffe playing an FBI agent who goes undercover as a Neo-Nazi, as he does in his new film, Imperium, is totally unexpected. On Monday, along with director, Daniel Ragussis, and co-writer, and former undercover agent, Michael German, Radcliffe stopped by AOL Build to talk Imperium , and he also shared the reason he is glad to have the Harry Potter films under his belt. (And it's not just because they were hugely successful.)

"I was very lucky early in my career to be able to do Potter and do all those huge action sequences," he said during the panel, "Because it's not something that like... you know, I'm not, like, your prototypical action star."

But he's not just being charmingly self-deprecating, he's making a comparison to the type of roles he takes on nowadays, as a 27-year-old, which aren't exactly mainstream and tend to be either very dark (Kill Your Darlings) or very weird (Swiss Army Man). "It's nice to find roles like this where it has the sense of a real thriller, but the authenticity of real undercover work," he said, describing his role in Imperium. "So when this part came along... it's a lovely sort of combining of all the things I like in a movie."

Even though he doesn't get to do any big action scenes in this one — at least not in the Harry Potter sense — he did have to do something that, for him, is pretty risky: drive a car. "It's the most stressed I ever am on set is whenever I have drive a car," he says after noting that he only got his license last year. "I broke a car on a low loader once, which is when you're just being towed and they make it look like you're driving, and I still managed to completely wreck a car."

As for getting inside of his character in Imperium, Radcliffe noted that there were a couple unusual things he had to do to prepare. "I mean, I don't normally look at white supremacist blogs," he said. "But other than that, I mean, I shaved my head on camera and that was interesting. And I was very relieved to find out I don't have any cranial deformity or something I didn't know was there. Other than that it was just about reading and getting a chance to talk to Mike [German]. Getting the chance to talk to an undercover agent is not something I get to do often."

While getting into character for this specific role was "fascinating and very depressing," Radcliffe seems to be thoroughly enjoying all that comes his way in his career. "It's huge amounts of fun," he said. "I'm fortunate to do a job where the more challenging my job gets the more fun it becomes."

So to anyone who thinks that Radcliffe's roles are surprising just because he's not a bespectacled wizard anymore, know that there's more that goes into his career choices than just doing something different. The actor likes to challenge himself, and it looks like his upcoming film is going to show just that.

More like this
Sadly, 'Fantastic Beasts: The Secrets Of Dumbledore' Isn’t Streaming — Yet
By Arya Roshanian
Elizabeth Olsen's Chris Evans Friendship Update Was Accidentally Hilarious
By Grace Wehniainen
Hayden Panettiere Will Return For 'Scream 6': "We F*cking Won, Scream Fam"
By Jack Irvin and Jake Viswanath
Danny Boyle Knows Exactly Who He Wants To Be The Next James Bond
By Sam Ramsden
Get Even More From Bustle — Sign Up For The Newsletter