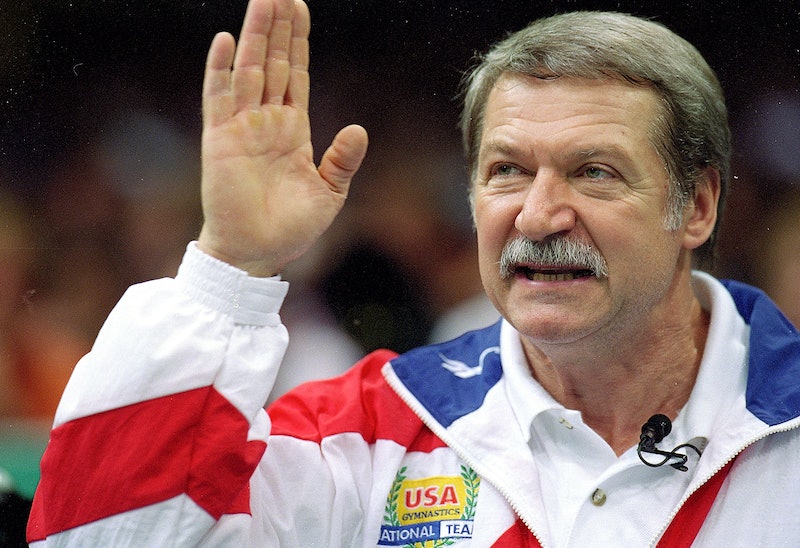 Nadia Comaneci, representing Romania, scored a perfect 10 in the 1976 Olympic Games in Montreal, and behind the scenes, there was one Olympic gymnastics coach who helped her achieve the momentous feat. His name is Bela Karolyi, but where is he now? Comaneci's score been a historically treasured moment for gymnastics enthusiasts everywhere, and it should come as no surprise, then, that for the past few decades, Karolyi and his wife Martha have become icons in the sport.

Their careers so far have seen them rack up a number of gold-medal-worthy highlights, but the Rio Olympics will be their last. Karolyi retired in 1996, and then made a final appearance in 1999 as National Team Coordinator before Martha took over as head coach. But while his wife coaches one last time, Karolyi continues to contribute to the Olympics, as well as plan for his future. According to The Washington Times, Karolyi is providing prime-time Rio coverage as a correspondent for NBC Sports. As for the complete post-Olympics future? Karolyi will reportedly be relaxing at the Karolyi ranch in Huntsville, Texas, where the women's teams have trained for the past 15 years.

When it comes to gymnastics, the American women's team is heavily favored to win a second gold medal in Rio this year with Simone Biles on the team. (Update: The USA women's team won gold Tuesday night in the Team All-Around competition.) Gymnastics has captured American viewers for a long time, especially since the country has a history of taking the gold in most international athletic events. A major reason for this rests with the Karolyi talent — by 2015, the two had trained 28 Olympians, 15 world champions, 12 European champions, and six U.S. national champions, as reported by Time in their roundup of Karolyi highlights.

Karolyi and his wife, both of Hungarian descent, immigrated to the United States in 1981. Two years after moving to America, the couple set up the Karolyi Ranch. This ranch, located in north Houston, boasts almost 40 acres of land, and has become a pivotal point of success when it comes to gymnastics training. The couple had fled Romania, where they trained legends like Comaneci, in fear that their success story was being used to push a communist agenda.

After 15 years of running the ranch that helped foster some of America's most prized gymnastic talent, USA Gymnastics will be buying the ranch, reported USA Today in July. Since 2011, it's been a designated Olympic training site, and while the ranch will be bought after Martha's retirement, this doesn't seem to change Karolyi's retirement plans.

In an interview with The Washington Times, Karolyi said he will continue to relax at the ranch, and added, "This is my place. This is the place I'm going to stay." But until the Olympics wind down, while Martha continues to coach the team, Karolyi will be working with NBC Sports as a commentator, along with 169 others staffed by NBC.

The couple are also set to be part of an NBC Sports feature documentary about their 50-year partnership, which will air at a later date.