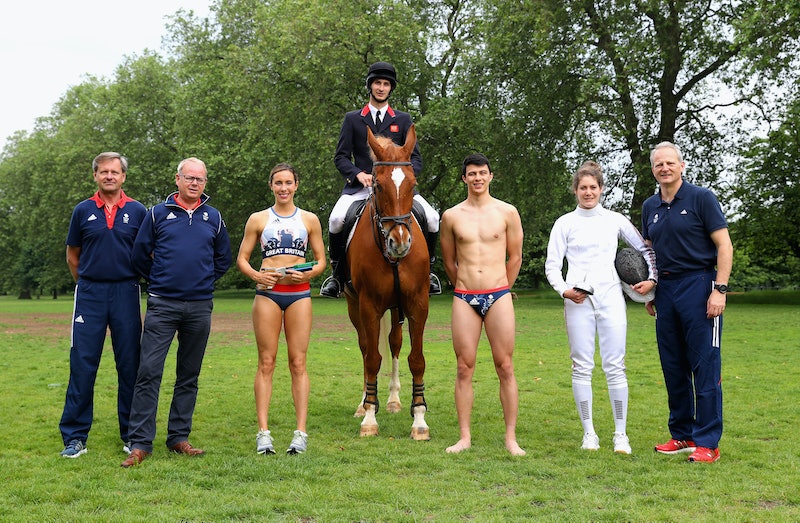 If you're a major Olympic fan who's embarrassed to be asking yourself what the Modern Pentathlon is, don't be. Embarrassed that is. The five-part marathon-of-a-competition has raised a lot of eyebrows in that a lot of people have heard of it, but have no idea what it actually is. Usually the thought process goes like this: oh pent, that's five. Because of The Pentagon. It has five things. Running, swimming — and then they go blank. That's because there are no five competitive sports that sound like they go together. Beyond the land of track and field, competitive sports tend to be relatively different. So if you've gone totally blank after recalling your basic knowledge of what sports logically might go together, it's cool. It's a totally normal reaction because unless you're well-versed in the sport series yourself, you would know nothing about it. There are no clues in the name. None!

That said, the Pentathlon has actually been part of the Olympics for over a century. It first joined in 1912 and was created by Baron Pierre de Coubertin, who is also the founder of the modern Olympics. His games, his rules people! Back then, the five-part sporting event called for well-rounded soldiers. It called for and celebrated athletes who were incredibly well-rounded, to say the least. For these skill-sets were battle-based. Now, in the modern Pentathlon, the five sports are meant to showcase multidimensional athletes of various physical schools and requirements. The races include fencing, horse jumping, swimming, running, and pistol-shooting. Basically this event calls for athletes who can do everything and maybe should probably next sign up to be The Bachelor or Bachelorette, because what else could you possibly look for in a human?!

These athletes know how to defend themselves, have extreme endurance, balance, poise, and are basically fearless. I mean, we already are in awe of athletes who pick one sport. How many people wake up in the morning and are like, "Hm, I'm going to train for five different sports and compete in the Olympics one day." And yet somehow people do, and this incredible sport is often overlooked at the Olympics.

Here's how it works: the points are scored and converted into time for the two mile race with the first three finishers being the ones to take home the medals. Beginning with fencing, all 36 athletes face each other over one-minute rounds — the win rate of over 70 percent fetches 250 points. Next in swimming, participants with a time of less than two minutes and 30 seconds get 250 points. Then, in horse riding, athletes are required to jump over 12 obstacles and collect points based on timing and performance. The shooting and the running events are combined with five targets placed after every 800 meters. Athletes are organized by their points in first three events.

Now go find a sports bar and show off your fun facts! This only comes but once every four years, after all.

More like this
Meet The Disney Imagineer Bringing 'Guardians Of The Galaxy' To Epcot
By Charlie Mock
Starbucks’ Chocolate Cream Cold Brew Tastes Like This Retro Candy
By Emma Garza
The Meaning Of Angel Number 555, According To Numerologists
By Kristine Fellizar
8 TikTok Pasta Recipes To Try Out At Home
By Emma Garza
Get Even More From Bustle — Sign Up For The Newsletter