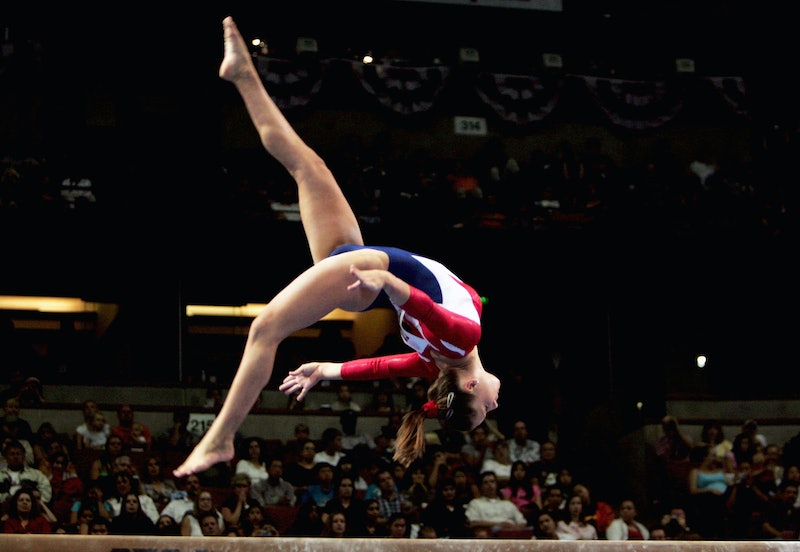 Carly Patterson is a big deal in the world of women's gymnastics. She helped put Team USA back on the sport's map in 2004, when she became the first American woman in 20 years to win the gold medal in the all-around individual competition. She was also the first American woman to become the all-around champion in an Olympic year in which countries were not boycotting the Games. In 2016, Patterson is giving her insights on the U.S. team as the gymnastics competitions kick off. After the qualifying trials, Carly Patterson couldn't be prouder of Team USA.

Gymnasts from the United States dominated the scoreboards at Sunday's trials for both the individual and team all-around competitions. Three of the five team members took the top three spots for the individual all-around, though only two will compete (Simone Biles and Aly Raisman), due to a rule that no more than two members of any country can participate. And collectively, the gymnasts catapulted Team USA to a near-10-point lead over any other country for the team all-around qualification.

Patterson had a lot to say about each individual gymnast's performance throughout the trial. She praised Raisman's floor routine, calling her a "fan favorite." She made particular mention of the dismount Raisman used off the balance beam, Patterson's field of specialty. The double Arabian dismount is actually known as "The Patterson"; the former gymnast was the first to perform it during the Olympics.

Gushing about Biles' near-flawlessness, Patterson wrote, "You can't say one negative thing about any of her routines." Patterson also gave props to Gabby Douglas, who finished in third place individually, for her performance under pressure as reigning all-around champ, making special note of her bar performance.

Patterson also praised the bar routine of Madison Kocian, a member placed on the team particularly for her expertise in this field. And the former Olympian predicted that final team member Laurie Hernandez, who gave an impressive floor performance, might have her chance at the all-around gold medal in 2020's Tokyo Games.

Patterson, who took home a silver team medal and a silver balance beam medal in addition to her all-around gold in 2004, has a front-row seat to see a whole lot more gold going Team USA's way in 2016. The country's ascent in the Olympic competitions began, in many ways, with Patterson, and she's beaming with pride to see 2016's young women soaring to new heights.