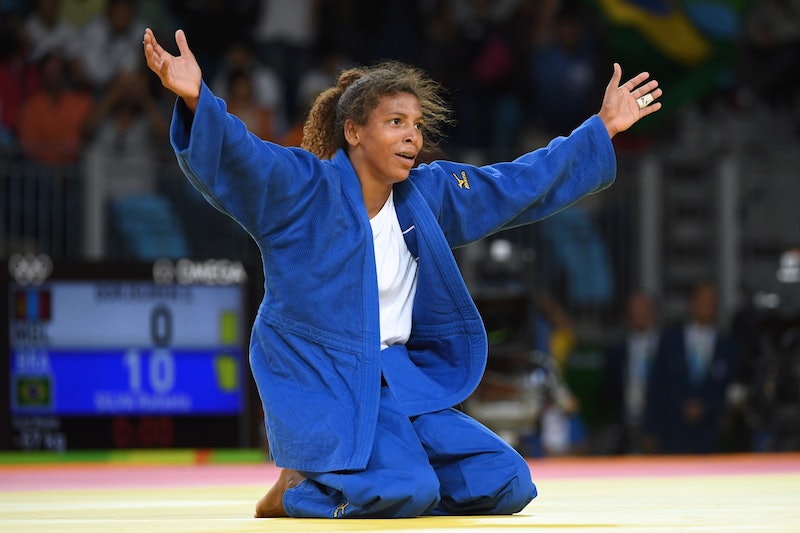 When the 2016 Olympics in Rio de Janeiro kicked off, one Brazilian woman already had one big record under her belt: She was the first woman to win the world championship in judo. Now, Rafaela Silva won Brazil's first gold medal of the Rio Olympics, defeating Sumiya Dorjsuren of Mongolia in the 57-kilogram division of the games' Judo championship on Monday.

Silva, who grew up in the slums of Rio, was disqualified from the 2012 London Olympics during a preliminary round after she reportedly executed "an illegal leg grab" against Hungary's Hedvig Karakas. It was a brutal call: though she'd actually won the match, the referees determined that the move was no longer allowed under new judo rules.

That's hard enough. But after being disqualified, Silva was flooded with racist messages on social media. It was so bad that she considered changing careers entirely. "I was very sad because I had lost the fight," Silva told the Canadian Broadcasting Corporation. "So I walked to my room, I found all those insults on social media, they were criticizing me, calling me monkey, so I got really, really upset. I thought about leaving judo."

Her family says that she became depressed and withdrawn, and lost focus on her sport. Silva took several months off from judo, but eventually started training again. In 2013, it paid off when she won the world championship.

"The only medal I don't have is an Olympic medal," Silva told The New York Times before the 2016 games. "To have a chance to win one in front of my family and friends is priceless."

Silva's victory is a welcome development for the Brazilian team, which was expected to do well in the judo competition but faltered twice in weekend matches. On Saturday, defending champion Sarah Menezes came short of winning the bronze medal in the 48-kilogram division. Erika Miranda, competing in the 52-kilogram category, narrowly missed out on the bronze the next day.

Several of Silva's former foes from 2012 didn't fare as well this year. Reigning champion Kaori Matsumoto, who took home the gold in the 57-kilogram division at the London games, was defeated in the semifinals in Rio, though she ultimately won a bronze. America's Mari Malloy, who took home the bronze in 2012, was eliminated earlier after losing to Lien Chen-Ling of Taiwan. And, in a rematch of 2012, Karakas was defeated by Silva in the quarterfinals.

Silva's gold medal is a big deal for Brazil. The country has never taken home more than five gold medals in a single Olympics, and its athletes have won more medals in judo than any other sport. Furthermore, Brazil is in the midst of its worst recession in over 50 years, and to top it off, hosting the Olympics cost the state of Rio an additional $3 billion. Silva has won a victory for herself, her city, and her country, and it's a reminder of the Olympics' extraordinary and unique ability to lift spirits and boost morale in otherwise trying times.