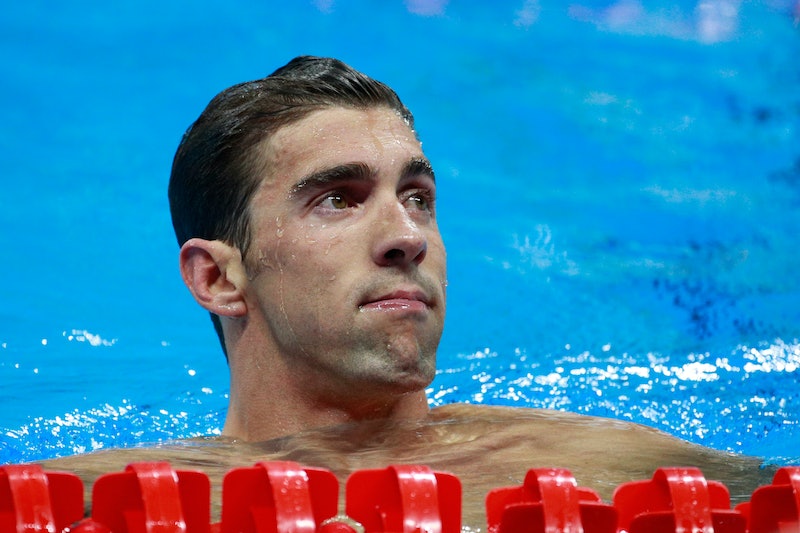 Before the 200-meter butterfly semifinal race kicked off, the world-renowned Olympic swimmer Michael Phelps' face while Chad le Clos was dancing was everything viewers could have wished for. Clearly, the two have very different pre-race prep routines: Phelps seems to be a glare-and-ignore type while le Clos seems a bit more confrontational. The interaction between the two swimmers was, hands-down, one of the best moments of the games yet.

According to Fox Sports, le Clos kept his eyes on Phelps up until the moment the race began. Other than a now-infamous glare, Phelps paid little attention to his competitor as le Clos did a little dance in front of him. The attempt didn't get any attention from Phelps, whose face twitched with seriousness.

"It's been a dream of mine since I was a little boy. I just wanted to race Phelps in the final and I've beaten him. I can't believe it," he told Reuters in 2012. "Phelps is my hero and I love the guy. To beat him, I can't believe it."

While le Clos was celebrating in, a defeated Phelps threw his goggles into the water and stormed past reporters without posing for pictures. As a wise woman once said, there used to be mad love between the two gold medalists, but now they've got bad blood.

It seems like Phelps channeled his apparent disdain for the South African swimmer into Monday night's preliminary race: he came in second place, clocking in at one minute and 54.12 seconds. Le Clos finished just over one second after him.

At 31 years old, Phelps is still young — but in Olympian years, he's set to retire. This year's games in Rio de Janeiro could be his last chance to prove himself, so the stakes are higher than ever. Yet at the same time, Phelps is the most relaxed he's ever been, and it's his mellowed-out state that's leading him to victory.

"I'm having fun again," he told the Los Angeles Times. "I'm enjoying what I'm doing again. I think I'm at that point that, whatever's left, I'll be able to turn the page and say I was able to finish the way I wanted to. And to me, that's all that matters."

Phelps and le Clos — as well as Hungarian swimmer Tamás Kenderesi, who placed first in that semifinal heat, and Danish swimmer Viktor Bromer, who came in fourth — will compete in the 200-meter butterfly finals on Tuesday night. If tonight's prelim is any indication of what's to come, it's going to be a wild ride.

"Everyone has their own race strategy," Phelps told USA Today's Nicole Auerbach after the race. "If that's his, that's his."

In addition to his 18 Olympic gold medals for swimming, Phelps should take home the gold for shading the competition.