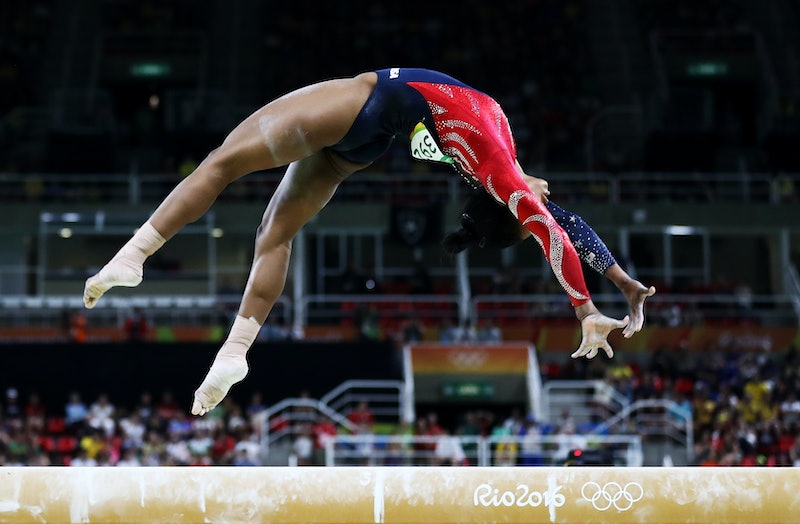 In the case of the 2016 Olympics in Rio, there actually can be too much of a good thing. The U.S. women's gymnastics team proved this when they won, won, and won again during the first weekend of the games, putting them 10 points ahead of China, their closest competitor, in the qualifying rounds on Sunday night. The third Team USA gymnast to win was fan favorite Gabby Douglas, who can't advance to the Olympic finals. So why won't she be able to defend her 2012 gold medal title? The reasoning behind it is pretty sad, considering the athlete's stellar performances.

According to rules set by the international gymnastic federation, which governs gymnastics at the Olympics, only two athletes per country are allowed to advance to the finals, and Douglas scored just below Simone Biles (who scored 62.366 points) and Aly Raisman (who scored 60.607). Douglas scored 60.103 points, making her the third-highest scorer for Team USA. The rule disqualifies her from the finals, and from her opportunity to defend her 2012 title as an all-around gold medalist.

Despite being beaten out by less than half a point, Douglas didn't mourn the supposed loss. In an interview with the Associated Press, Douglas said she's "not disappointed at all," and that she has "no regrets" about her performance.

The "two-per-country" rule was initially put in place to ensure that specific countries don't dominate a single sport and to encourage inclusiveness in Olympic finals, but Douglas' teammate and Team USA captain Raisman very publicly disagrees with it. Raisman called the rule "stupid" and "the dumbest thing ever," and she has years of reasoning to back it up. In 2012, Raisman also narrowly beat out another teammate, Jordyn Wieber, and had to see the aftermath:

We [Raisman and Wieber] roomed together and that night it was just devastating…it was heartbreaking for me to see her have to go through that because it’s not fair. It’s just stupid, I think the two-per-country rule is the dumbest thing ever. Who cares if there’s five Chinese girls in the finals; if they’re the best, they should compete.

Although the rule does seem quite unfair, For the Win writer Maggie Hendricks argued that it's in place for a good reason. Hendricks wrote that while it's the international gymnastics federation's responsibility to govern Olympic gymnastics, they also have encourage gymnastics to grow in all nations; not just in an elite few. She explained how people are more likely to enroll their children in gymnastics classes if they see people like them — from their country — performing in large competitions like the Olympics.

Although many fans and commentators (and fellow Olympians) find the two-per-country rule unfair, it's worth pointing out that although Douglas won't get to defend her all-around gold medal title, she will be advancing to the uneven bars final, which she undeniably dominated on Sunday night. Although the rule does seem somewhat too restrictive to a layperson like me, we have to remember that Douglas won the all-around gold medal in 2012, and could very well do so again in 2020.