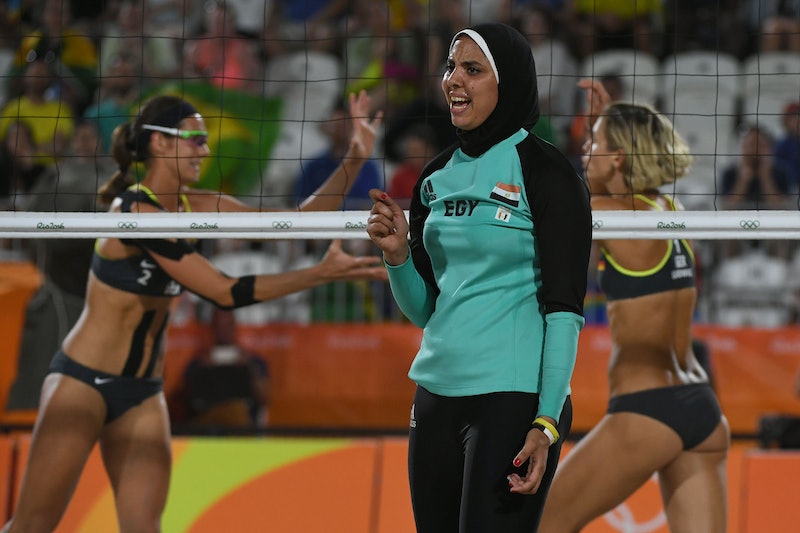 Female athletes are not immune to the pitfalls of sexism — something we may have assumed to be true but has been undoubtedly confirmed by the coverage surrounding the Rio Olympics. Whether it's tokenizing women of color, attributing women's success to their male partners, or over-focusing on the sexualities of athletes, the media conversation surrounding the games has already proven to be as problematic as anyone could expect, and this is especially evident in some of the photography coming out of Rio. One insightful tweet proved that sexism exists in Olympics photography, via a male gaze that pits cultures against each other as opposed to uniting them.

The tweet below shows two photos of the same match between Egyptian player Doaa El-Ghobashy and German player Kira Walkenhorst. Viewers were treated to what some are calling a "cultural divide" as they watched the bikini-clad Walkenhorst play El-Ghobashy, who wore a long-sleeved shirt and pants and a hijab. She was able to participate while retaining her chosen modesty due to relaxed uniform rules, which allowed El-Ghobashy and her teammate, Nada Meawad (who wore a similar uniform, sans hijab) to become the first Egyptians to compete in women's beach volleyball at the Olympics.

While photos of the Walkenhorst and El-Ghobashy became a popular point of online discourse, it was two specific photos that caught the attention of one Twitter user, who pointed out that the two photos show the difference between the way a female photographer captured the moment versus the way a male photographer chose to take the picture.

According to BuzzFeed, the photo on the left was taken by photographer Lucy Nicholson for Reuters, while a reverse image search showed that the photo on the right was taken by photographer Antonio Lacerda for the European Pressphoto Agency (EPA). While both photos show the reality of the subjects — two women from different cultures, wearing vastly different uniforms, coming together in competition — Nicholson's photo is of the two in action, from afar, while Lacerda's shows Walkenhorst's objectified butt in the unfocused foreground, with El-Ghobashy in the focused background, staring intently at her opponent.

These two photographs show that Nicholson saw the women as equally fierce athletes and that Lacerda saw them as a woman in a bikini whose butt was showing versus a woman in hijab glaring at her. Though the photos were taken moments apart, they tell incredibly different stories.

Nicholson's photo tells the story of different cultures meeting (whether it represents a negative divide or positive diversity is left up to the viewer), while Lacerda's photo objectifies and perversely valorizes Walkenhorst's physique while showing an envious Other in El-Ghobashy. Nicholson's photo shows two equals — Lacerda's places their cultures at odds. The prevailing narratives of both are as different as the athletes' uniforms, and it's unlikely that that difference doesn't have to do with the genders of the photographers.

Lacerda's photo takes the significance of the match — that a woman competed in hijab in what has long been considered a bikini-wearing sport — and turned it into an objectified "clash of the cultures" illustration. If nothing else, the juxtaposition between these photographs show how easily bias can creep into reporting, and how insidiously it worms its way into visuals specifically. The male gaze is clearly alive and well at the 2016 Olympics in Rio, but by drawing attention to it, hopefully audiences can help to dissipate it.