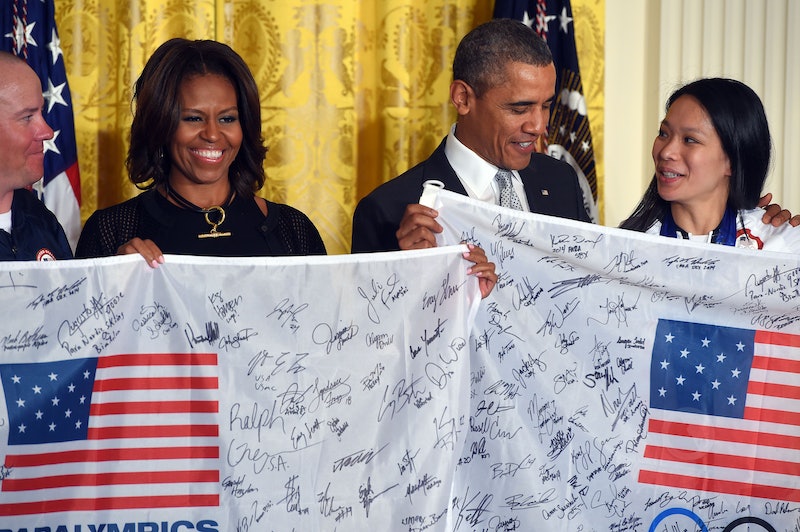 Two people whom you can count on to tune into the Rio Olympic Games are none other than President Barack Obama and First Lady Michelle Obama. They took to Facebook Monday night to talk about the Games and quiz each other on their personal favorites of Olympics past. So what is the takeaway from Pres. Obama and Michelle's video about the Olympics? Michelle is too tall to be a gymnast. But no, really. The First Couple had words of encouragement for Team USA, as well as memories and more to share about their relationship to the Games.

The video was released on the White House's Facebook page, and has already racked up nearly one million views eight hours after posting. It was also uploaded to YouTube and shared on the White House's Olympics web page. Standing in front of a grandfather clock and some mini blinds, they cut right to the chase. "We are so excited for the Olympics," Michelle tells the camera, admitting that she's a "lifetime diehard Olympics fan." The president chimes in, "Me too."

Then they pull out note cards with the Olympic rings on the back and start quizzing each other. The president goes first, asking Michelle, "If you could compete in any Olympic event, what would you choose?" Her response is the greatest:

It would be gymnastics. I'm not built for gymnastics, clearly — a little too tall. But they are phenomenal, and if I could flip like that, I would do it in a heartbeat.

Michelle also shared that when she was younger, the Olympics were "an event," and her whole family would sit around the TV to watch. "The Olympics would take over life," she explained to the president, who then did his own rendition of the Olympics song — don't miss it about 53 seconds in.

Then Michelle began her interview of Barack. She asked who his all-time favorite Olympian is. His answer? Jesse Owens, even though he was "a little" before his time. Owens was a four-time gold medalist track and field athlete who competed at the 1936 Olympics in Germany. Owens was black, and his presence at the games was controversial at the time, and now is seen as incredibly historic.

Owens' obituary in The New York Times explained that he was harassed in Germany — the goal of the games was in part to prove Hitler's Aryan supremacy claims, but Owens and other black American athletes embarrassed him. "When you think about being not only the fastest man in the world, but you're doing it front of the Nazis, sending a clear signal about what America stands for, the equality of all human beings, it's pretty powerful stuff," Obama said.

Next up? Obama's favorite sport to watch: the 200-meter dash. Not the 100-meter, because it's too fast. And why not gymnastics? Well, believe it or not, it makes him too tense. "I'm like, 'Oh, she's gonna fall,'" Obama says while acting nervous. Again, don't miss it at around 1:45. Then Pres. Obama had a special message for Team USA:

Bring home the gold for the red, white, and blue. Proud of you guys. Thanks for everything. I know you've been training hard. You're going to do great.

This was actually Obama's second address to athletes — third if you count his Instagram and Snapchat appearances. His video, released at the beginning of the Games, had an important message for Americans watching at home, too:

When you watch these Games, remember that it’s about so much more than the moments going by in a flash. Think about the countless hours these athletes put in, knowing it could mean the difference in a split-second victory that earns them a lifetime of pride, and gives us enduring memories. It’s about the character it takes to train your heart out, even when no one’s watching. Just hard work, focus, and a dream. That’s the Olympic spirit – and it’s the American spirit, too.

It's fun to see the president and Michelle so excited to support the American athletes, but it's bittersweet knowing that they won't be in the White House the next time the Olympic torch comes to town.

More like this
Jake Daniels Just Became The UK’s First Active Football Player To Come Out As Gay Since 1990
By Sam Ramsden
What Is Jeanie Buss' Net Worth? The Lakers President Is Uber Rich
By Hugh McIntyre
Michigan’s Governor Is “Going To Fight Like Hell” To Protect Abortion Access
By Andrea Zelinski
How To Fight For Reproductive Rights, Based On How Much Time You Have
By Courtney Young
Get Even More From Bustle — Sign Up For The Newsletter