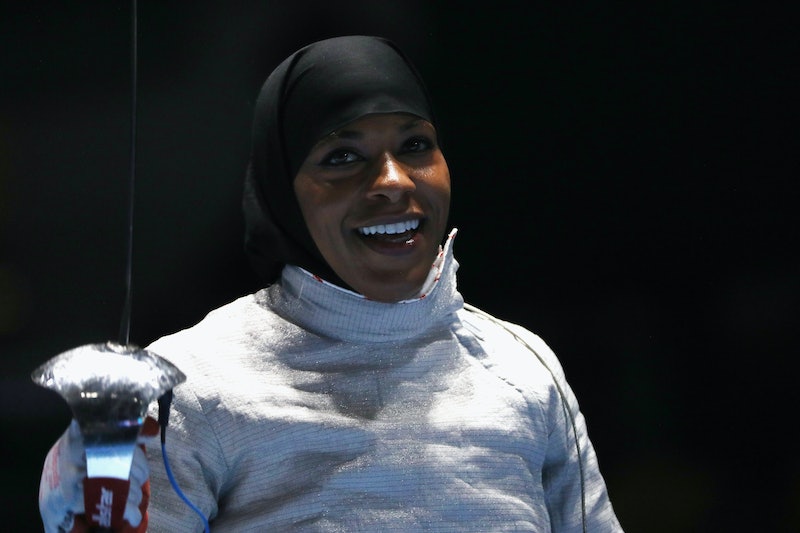 Team USA has been making history at this year’s Olympics since the opening ceremonies began. And in addition to being among the best in the world, the athletes of Team USA are incredibly diverse, a true representation of America’s citizens. Fencer Ibtihaj Muhammad, the first U.S. Olympian to compete while wearing hijab, is no exception — and she’s the perfect antidote to the Islamophobia that has come to characterize part of this year’s presidential election.

Republican presidential nominee Donald Trump infamously called for a blanket ban on Muslims in December 2015, and has since doubled down on his offensive statements time and time again. Most recently, for example, he publicly insulted Khizr Khan, the father of a Muslim-American Army Captain who was killed in Iraq. Not long after, Trump’s running mate, Mike Pence, suggested that a Trump administration "Muslim ban" would apply to people of other religions who hail from “regions or countries that have been compromised by terrorism.”

“Many of the principles of radical Islam are incompatible with Western values and institutions,” Trump said in June following the Orlando shooting. “Radical Islam is anti-woman, anti-gay, and anti-American. If we want to protect the quality of life for all Americans — women and children, gay and straight, Jews and Christians, and all people — then we need to tell the truth about radical Islam.”

Nonetheless, Trump has failed to identify what he means by “radical” Islam. His earlier call to ban all Muslims from entering the United States suggests he sees no distinction between “radical” Islam and its non-radical elements. Many fear that in Trump's point of view, it’s not just “radical” Muslims who are un-American, but all Muslims.

That’s why Muhammad is so important. Her involvement on Team USA displays the inclusiveness and diversity America must cherish and promote. Based on their responses on social media, viewers seem to think so too.

A lifelong athlete, Muhammad began fencing at the age of 13, partially because the sport allowed her to compete while adhering to Islam's rules of modesty — rules she chooses to follow. While in high school, she served as captain of her school fencing team. She was recruited to Duke University in 2003, won the Junior Olympics in 2005, and the U.S. national title in 2009.

"I'd love for other minority women and religious minorities to believe they can excel in something outside the norm," she told The Wall Street Journal in 2011. "Not just sports, anything where they're breaking the barrier, and not be deterred by what the image is just because they fall outside that box."

Five years later, her wish has come true. Muhammad, who is ranked number eight in the world and number two in the U.S., competed in the individual fencing quarterfinals on Monday. Although she eventually lost to France's Cecilia Berder, Muhammad will still participate in the upcoming team fencing quarterfinals against Poland on Saturday. Most importantly, whether she wins or loses, she has made history, and America is taking notice.

After President Obama met Muhammad, he said, "I told her to bring home the gold." She's also received a shout-out from Hillary Clinton, who emphasized that the Olympic fencer is as American as it gets.

The fact that Muhammad has to defend her identity — her place of birth, her religion, her race — to strangers is appalling. Worse still, she's had to deal with Islamophobia her entire life; she recently revealed that she does not feel safe in America, due to a recent uptick in anti-Islamic sentiment and xenophobia.

"I'm very vocal about these things because I want people to know I'm not a novelty, I'm not special in any way, I'm a woman who wears hijab and these are my experiences," Muhammad told The Daily Beast.

When Trump says that Islam is incompatible with American values, he's targeting people like Muhammad, who was born and raised in the U.S. and happens to be Muslim. Muhammad isn't the only Muslim-American who's being hurt by Trump's words and actions, but she has the platform to prove just how wrong he is.

More like this
How To Fight For Reproductive Rights, Based On How Much Time You Have
By Courtney Young
LGBT+ Men Fleeing Afghanistan Were Denied Asylum By The Home Office, New Findings Show
By Sam Ramsden
Twitter Was Saying The Same Thing About Sam Ryder’s Surprising Eurovision Result
By El Hunt
Harry Styles Called For "Backlash" In Powerful Statement On Abortion Rights
By El Hunt
Get Even More From Bustle — Sign Up For The Newsletter