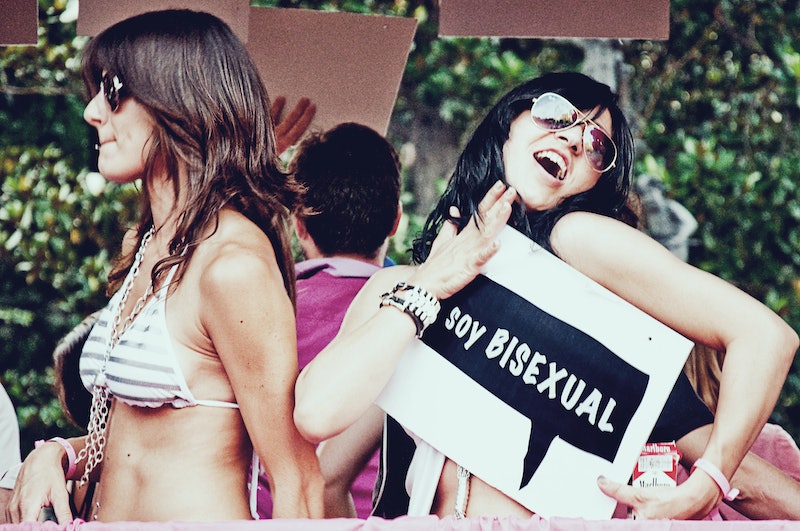 What with gay marriage and gender-neutral bathrooms, we've been hearing lots lately about lesbians, gays, and transgendered people. But what about the B in LGBT? A new study shows that bisexuals are far less likely to come out of the closet, mainly because of stereotypes that still stand.

Researchers of a Pew Research Center survey, featured yesterday in the LATimes , found that only 28 percent of bisexuals let their friends and families know about their sexual orientation, compared to 71 percent of lesbians and 77 percent of gay men. For bisexual men, the number was even smaller, with only 12 percent out of the closet.

The main reason cited for staying in the closet was the stereotype that bisexuals are simply indecisive, sexually confused, and incapable of monogamy. Bisexuals are seen as opportunistic: They have a wider pool of sexual partners to choose from and are often seen as avoiding discrimination by entering in straight relationships. And for many, it's not just a phase: More women switched from identifying as lesbians to bisexuals than vice versa.

Despite the stereotypes, bisexuals face their own set of challenges. "Bisexual women complain they are leered at by straight men and rejected by some lesbians as sexual 'tourists' who will abandon them for men," explains LATimes writer Emily Alpert. "Bisexual men, in turn, struggle to persuade men and women alike that they aren't just gay men with one foot in the closet. Both are stereotyped as oversexed swingers who cannot be trusted."

The idea that bisexuals are more promiscuous makes people less likely to come out in the workplace. Only 11 percent of bisexuals have come out to their closest work colleagues, compared to 48 percent of gay men and 50 percent of lesbians.

We tend to assume people are either gay or straight based on their current partner, and far more bisexuals were in a relationship with a member of the opposite sex, researchers found. Publicly coming out of the closet may seem less necessary for bisexuals who are in a committed, monogamous, heterosexual relationship.

Yet staying in the closet can be dangerous: a Kent State University study found that bisexual women were more likely than straight or lesbian women to harm themselves or entertain suicidal thoughts.

It all boils down to sexual orientation being a part of your identity. Like any part of your identity, your sexual orientation is likely to be more complicated than the simple gay/straight/bi categories. Although bisexuality might be trickier to understand and to fit into our monogamous culture, it's an important factor in many people's identities that deserves consideration.

More like this
10 Thanksgiving Alternatives You Can Celebrate This Month
By Katie Mitchell
This Company Will Send STI Tests Right To Your Door
By Lexi Inks
The Strange, Sad, & Hilarious History Of Online Dating
By Samantha Cole
Read Dan Levy's Heartbreaking Message After The Club Q Shooting
By Stephanie Topacio Long
Get Even More From Bustle — Sign Up For The Newsletter