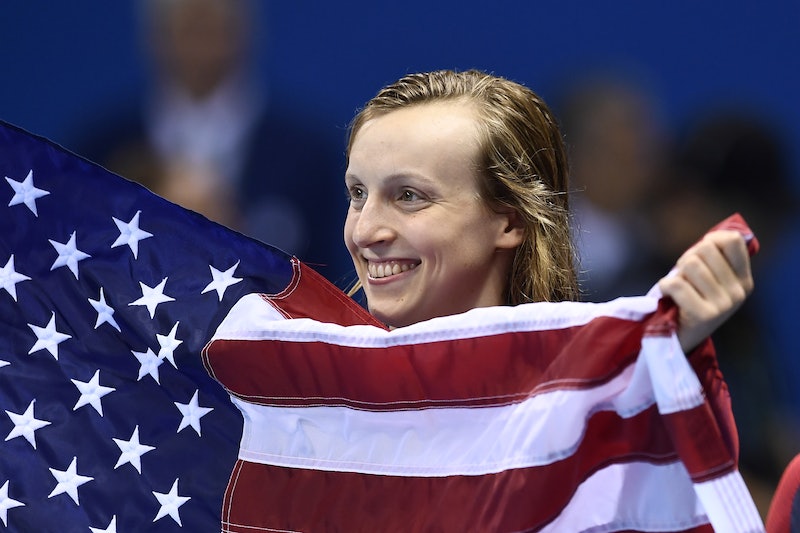 After winning gold and beating her own world record by two seconds, Katie Ledecky must have felt pretty exuberant holding up the American flag. "To see the 56 up there feels really good," she told journalists in Rio, referencing the her time, 3:56.46. The second-place finisher from the United Kingdom didn't even come close. And to make the moment even sweeter, Chelsea Clinton congratulated Ledecky on Facebook. Even in the midst of her mom's crazy presidential campaign, Chelsea still took the time for some patriotic well-wishing with one very important hashtag.

Chelsea wrote on the wall of her public page, home to more than one million likes, "Congratulations to Katie Ledecky for her gold medal & beating her own world record yesterday in ‪#‎Rio‬!" She linked to The New York Times article on the win, and then added, "‪#‎NoCeilings‬." Of course, another American woman currently in the business of shattering glass ceilings is her mother, Democratic presidential nominee Hillary Clinton.

Clinton made a big reference to that glass ceiling eight years ago in her Democratic primary concession speech to Obama, referencing "18 million cracks." Then the glass ceiling imagery was cemented in at the Democratic National Convention a few weeks ago, when a montage of all the presidents through to Obama were displayed on the giant screen, and then special effects showed pieces of glass breaking as Hillary Clinton came through. Now, every step toward November and after (assuming she wins) will be yet another crack.

For Ledecky, the ceiling she broke was her own. The personal world record that she beat was made at the August 2014 Pan Pacific Championships in Australia, and clocked in at 3:58.37. No one had made it under 3:59 before that. Now, she's gone on to shave nearly two whole seconds off that time. Watching the race, no one even came close to her — and she just kept getting faster and faster at the end.

Whether Clinton can blow it out of the park this November is another question, but there's the chance that she could win the election by margins matching Ledecky's. On August 9, FiveThirtyEight gave Clinton an 87.5 percent chance of winning the election, with 49.9 percent of the popular vote to Donald Trump's 41.9 percent, with 365 of 538 electoral college votes.

Until that happens, Chelsea will be busy on multiple fronts, and not just on Facebook (although she has been using that #NoCeilings hashtag to share stories about other inspiring women). In the depths of campaign season, she has been serving as a campaign surrogate for her mother, introducing her at the DNC. Plus, there's speculation about what kind of role she can play in a Clinton Administration and White House. Perhaps she could fill in for first lady duties that Bill's not quite qualified for.

Ledecky, for her part, will likely push on and keep making her own personal goals — and, of course, she'll break a few world records along the way.