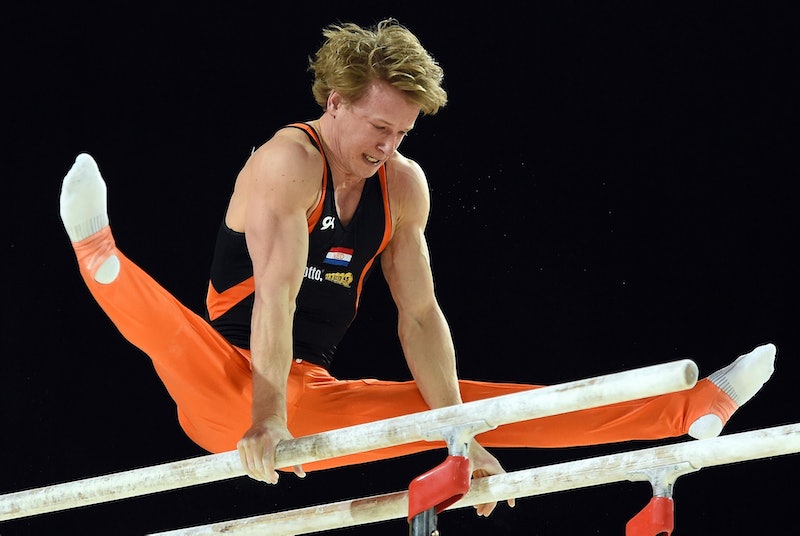 Olympian Epke Zonderland didn't get his nickname "the Flying Dutchman" for nothing. Even to those of us who tune in to the gymnast's Olympic events as novices, Zonderland's ability to twist, turn, and fly on the bars will assuredly make him a standout. Zonderland's "Flying Dutchman" title came after years of success with the Netherlands gymnastic team. But with a recent injury to the hand, a concussion, and multiple failed competitions behind him, the Olympian has something to prove anew during the Games in Rio de Janeiro.

30-year-old Zonderland first rose to gymnastics fame when he performed what was considered the perfect high bar routine at the 2012 Olympics in London. His mastery of the high bar went unmatched, placing him in the sport's history books as the first man to medal in gymnastics for the Netherlands. Combine that with the sheer difficulty of the final moments of his routine — a Cassina to Kovacs to Kolman release combination, for those familiar with the sport — and Zonderland had the world at his feet.

The gymnast's skills both on and off the bars left him flying high for a while, but a series of setbacks threatened to put a serious halt to all he had achieved through the years. Though he followed up his performance at the 2012 Olympics with winning the 2013 and 2014 world championship titles, Zonderland failed to maintain his title in 2015 after injuring his hand and suffering from a concussion after a fall.

Yet another injury left him uncertain of his Olympic future up until last week — newly sprained fingers almost knocked the gymnast out of the running for more medals in Rio. Zonderland told Reuters that he's still confident in his ability to place in the games: "Although my preparations for the Olympics weren’t perfect, I have the feeling that I would be able to challenge for a spot in the final. If I get among the top eight qualifiers, then I have 10 days to prepare for the final."

Zonderland hasn't missed the mark yet, either. He placed third in the qualifiers for the men's horizontal bar, securing a spot for himself in the finals. With any luck, the Olympian will be flying high once again.