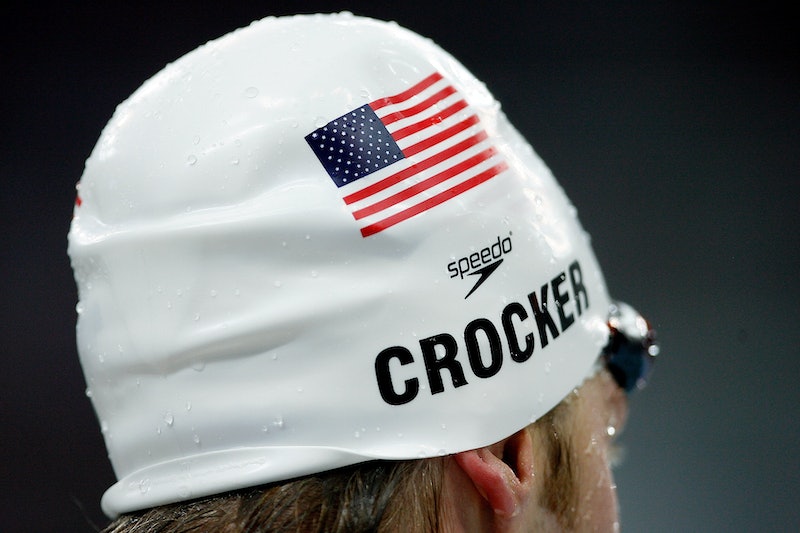 The swimming events at the Olympics may seem straightforward — the fastest swimmers win. And yet there are some mysteries regarding the sport. One of the biggest, which gained publicity after Dana Vollmer's swim cap fell off during her gold medal race in 2012, is this: Why do swimmers wear two caps? After Vollmer won the 100-meter butterfly, she revealed that she did so with just one of her swim caps.

So why did she do it? She's not alone. If you pay close attention at the 2016 Rio Olympic Games, most, if not all, of the swimmers wear one cap over their hair, and then a second one over their goggles strap. The goggles essentially go in between the two. Yahoo Sports' Pauline Vu explained the reason behind this back in 2012, after Vollmer pushed through with just one swim cap.

Vu spoke with Dave Salo, then the assistant coach to the U.S. women's swimming team. His take on the matter? It's primarily to help with the goggles. Even worse than losing a cap is losing googles, because that can be totally disorienting. Moreover, the outer cap is more aerodynamic and creates less of a drag in the water. "The outer silicone cap better maintains the shape and does not wrinkle as much, thereby causing less drag," Salo told Yahoo Sports. The inner cap is often latex.

The latex vs. silicone debate is a common one. This blog post sums up the worries of many swimmers. Silicone caps technically have less drag, but they can often feel like they are slowly coming off of your head, especially in a long race. Latex tends to stay put. But you can't go just latex because of frontal drag; don't forget, your head is the first thing to cut through the water. Gary Hall Sr., a former Olympian, gave the advice to "double cap" in a post for Swim Swam about reducing frontal drag:

Covering up that thick head of hair and creating a new surface for your head with the reduced friction of silicone is another good way to reduce drag. Most athletes today will double cap, leaving the goggle straps between the first and second caps. The outer cap should be a thicker silicone material to maintain its smoothness.

For Vollmer, the lack of a second cap didn't affect her ability to race at gold medal speed. But it did draw attention to her in a way that ended up helping many. She went on to design a cap for Speedo, all the proceeds from which benefited a charity to raise money for Simon's Fund, an organization which raises awareness about what can cause cardiac arrest in young athletes.

So if you decide to jump in the water and train for the next Olympics, don't forget to wear two caps. And maybe consider buying one for a good cause while you're at it.