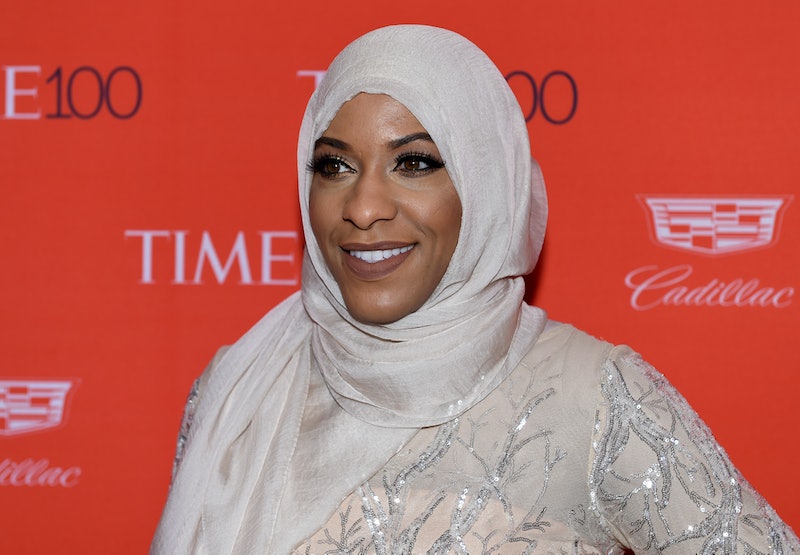 Olympic fencer Ibtihaj Muhammad has made headlines this week for her historic role at the 2016 Summer Games. She is the first American to compete wearing a hijab. While viewers wait for her next opportunity to show what she can do, it's her other career that has people talking. In 2014, the New Jersey native and her siblings launched a clothing line called Louella, which sells floor-length and long-sleeved dresses, jumpsuits, tops, skirts, and pants, all of which adhere to the Muslim practice of covering one's arms, legs, and neck.

The pieces feature flowing fabrics with interesting prints and fabrics, and boast an affordable price point — pretty much everything is $100 or less. Louella provides an alternative for Muslim women looking to cover up without adding too many layers or compromising their personal style. Even better, it's all made in America.

The line is an opportunity for the public to embrace the values of different religions. It's evident just how few clothing brands are conscious of religious traditions in their designs, especially when you consider how the siblings decided to form the line due to their difficulty finding clothing which adhered to their customs. By bringing the styles into the public eye, the group is providing more options for women who feel forced to choose between their religion and their personal style.

Beyond satisfying the Muslim requirements of covering up, Muhammad hopes that the line will also appeal to people outside her particular religion. She told ESPNW in an interview that she often receives notes from women asking if they are able to purchase from the website despite not belonging to the Muslim faith: "There's no clause on the website that if you're not Muslim you can't [wear it]. We want to appeal to women who want to dress modestly and practice no particular faith."

Muhammad has also partnered with car company Mini USA in their "Defy Labels" campaign, along with other Olympians, to encourage others to look past labels like "Muslim," and "immigrant." She's spoken out when she has faced prejudice, like this year at SXSW, where she was told she needed to remove her hijab so that the staff could check her in. She wrote about the experience for The Player's Tribune, saying:

You have to shrug off those moments because they’re commonplace when they really shouldn’t be. I can’t allow them to affect me and hold me back, because they would affect my journey. It’s important for us to discuss American Muslims and how they contribute to our society in a positive way. I choose to see the positive, and I try to lead every day with love.

By working hard and calling out attacks against her religion, Muhammad has advanced the conversation about diversity through her Olympic journey. She's done the same with her clothing line, which continues to inspire women around the world.